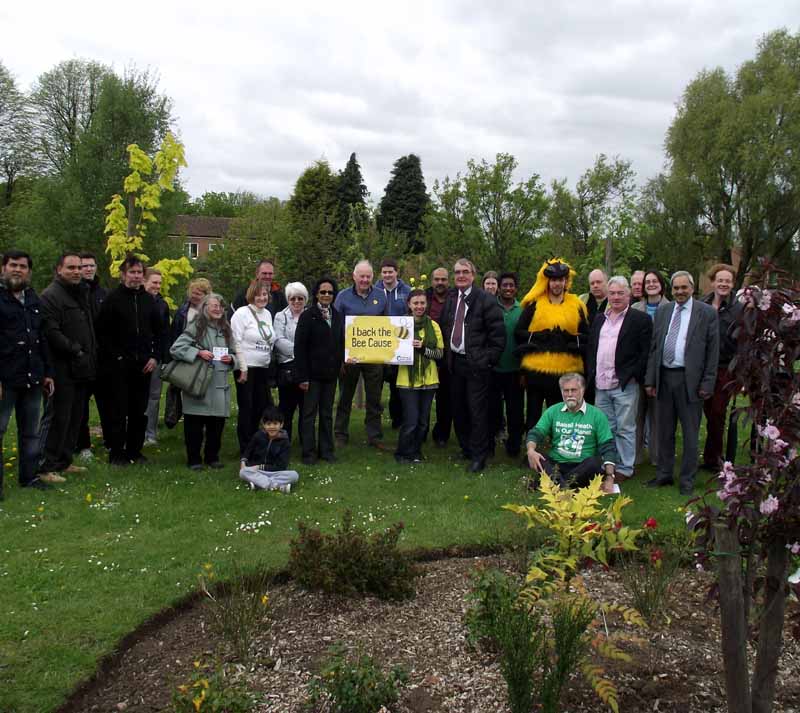 After Roger Godsiff formally opened the Jubilee Bee Garden, local campaigners took people on a Bee Walk along the River Rea, giving people the opportunity to learn more about bees, and what they can do to help them.

The Jubilee Bee Garden, planted in Balsall Heath is Our Planet’s existing Jubilee Garden by the Balsall Heath Green Team, is the first of three projects funded by Birmingham Friends of the Earth’s comedy gig last October There’s Something Funny in the Honey.

Roger Godsiff MP for Hall Green said: “I am happy to support the Bee Cause in its efforts to try and halt the decline in UK bee populations. Bees are essential to our food supply and also to our gardens, parks and countryside.

“I am very pleased to see this Bee Garden opening in my constituency and providing a haven for bees in our area. Creating Bee Worlds and planting wildflowers are great ways for people to take practical action to help bees.

“However, we also need action on a national level, and for the government to to adopt a national bee action plan to ensure that the way we farm our food and plan our towns and cities gets bees back on track.”

Rebecca Pollard Lead Biodiversity Campaigner at Birmingham Friends of the Earth said: “We’re extremely pleased that the first of our comedy gig funded projects is opening here in Balsall Heath. The Bee Cause aims to put the plight of the humble bee on the Government agenda. We want David Cameron to introduce a National Bee Action Plan, and doing something positive in here in Balsall Heath is a great way of taking action locally”

The garden opening event was one of many taking place across the country on the National Day of Action for Friends of the Earth’s Bee Cause. The Bee Cause aims to halt the decline in UK bee populations by calling for a national bee action plan, as well as asking people to take action locally by helping to create bee-friendly habitats.