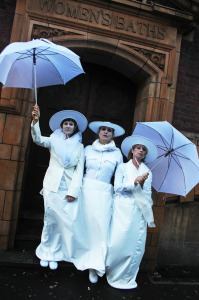 What makes a good neighbour? How much is it reasonable to tolerate when those next door behave badly? What responsibilities do you have to your neighbours, either to help them in difficulty or to intervene if there is distress or violence next door? Is ‘neighbourliness’ the secret to a harmonious community?

These are just some of the many questions explored by The Good Neighbour (And Her Many Trials Of The Heart), a new two-part interactive semi-improvised performance which takes place at Balsall Heath Church Centre (Part 1, Tuesday 18th November) and mac Birmingham (Part 2, Thursday 20th November).

Presented by citizens theatre company Fluxx, the performance follows the trials of two fictional adjacent inner city households – one Pakistani, the other Jamaican-English – as one of the homes is torn apart by domestic conflict. Should the other get involved, or is it ‘none of our business’?

Audience members are invited to not only observe the incident, but also interact with those involved, listening to and even questioning protagonists as a story unfolds towards a yet to be decided conclusion.

Using themes chosen following detailed consultation with residents of Balsall Heath, The Good Neighbour explores key issues deemed important to the community. While audiences can attend both parts independently, a more complete experience is gained by attending both as Part 2 continues the narrative.

The production marks the conclusion of a series of creative arts activities in the Birmingham neighbourhood, and is preceded by a free Urdu Poetry Night featuring local spoken word artists and performers (13th November, Balsall Heath Church Centre). The night will also be attended by Birmingham’s Lord Mayor, Councillor Shafique Shah.

Fluxx Director Chis Johnston said: “We’ve been working with Balsall Heath residents since the spring and The Good Neighbour reflects many of their concerns with a production that follows the repercussions of a specific fictional incident, and spirals out into the wider community.

“The performance, which include professional actors and local people, has an interactive element, allowing audience members to really get involved in the action – although they can simply observe if they prefer.”