Alan Clawley considers what should be the defining ‘iconic’ symbol of Birmingham.

Glyn Pitchford of the Civic Society thinks that Birmingham lacks a highly visual, iconic public work of art in an outside space. He wants to know if we care and if we would you like to see a new work or art that would be widely associated with Birmingham. What favourable images, he wonders, are conjured up when we think of  Birmingham, what defines Birmingham, nationally and internationally and what works or art have we seen, in the UK and abroad, that we strongly associate with its location?

I’ve driven past Anthony Gormley’s Angel of the North a few times now. It stands aloof on a tree-covered bluff high on the south bank of the River Tyne. It’s a great landmark and an impressive work of art. Its scale matches that of the ships that were once built on the Tyne. Its form of fabrication evokes the massive welded steel hulls of ocean-going tankers. Its brown surface signifies that it is made from rusting steel to remind us of redundant hulks waiting to be dismantled in a far-off scrapyard.

Birmingham can’t possibly compete with the Angel of the North. We don’t do ‘big’. It would be quite absurd to make a giant sculpture inspired by the making of jewellery, chocolate eggs, hand guns or the world’s first mini-car. A giant version of Birmingham’s tiny Assay mark, an anchor, wouldn’t make sense in a city that is further from the sea than any other in the country. A giant shot-gun doesn’t send the right image and the iconic Issigonis Mini is now made by BMW anyway.

And perhaps it would be invidious to pick one of the Thousand Trades that the Birmingham is reputed to have hosted in its heyday to represent us in a work of art.

Even if a suitable subject for a giant sculpture could be found it would have to sit on a hill above Birmingham in the way that the Angel hovers over Gateshead. I can’t see the owners of the Lickey or Clent Hills wanting to have it even if it were an exceptional work of art.

Something in the city centre can’t be big enough to compete with prominent ‘iconic’ buildings like the Cube, the new library or the Rotunda. City centre sculpture is inevitably modest in scale like Gormley’s Iron Man, Forward, or the Spirit of Enterprise (now in store). There just isn’t the space for anything much taller.

If these ideas are unconvincing Birmingham already has a giant sculpture. It’s known far and wide and is closely identified with Birmingham and the West Midlands. According to the former head of planning and regeneration, Clive Dutton, it can be seen from space and should be floodlit at night. It is of course Spaghetti Junction. It is a fitting symbol for a city that has paid unquestioning homage to the private motor car. It rises on giant concrete legs above the city’s obsolete canal system. It elevates motorised traffic above humble dwellings and little old streets. And it’s going to be there for a long time to come. 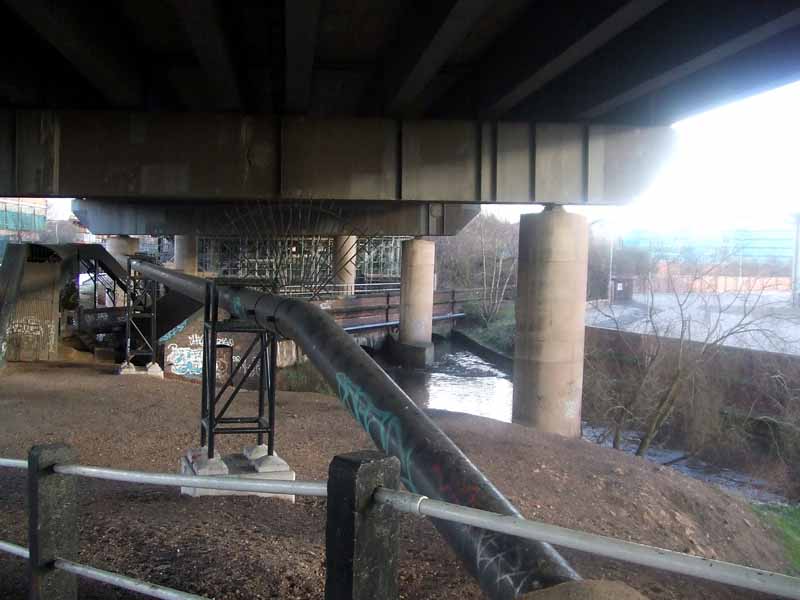 Gravelly Hill and the River Thame

So let’s not worry about keeping up with the North or anywhere else. Let’s just be ourselves and make the most of what we already have – an enormous iconic sculpture the likes of which no other city has and which has already been paid for. And with some energy-efficient floodlighting Clive Dutton’s poetic vision could be realised at little extra cost.