A decision by Walsall Council not to grit any roads on Saturday 23rd March has been described by Walsall’s Labour Group as “bizarre”. 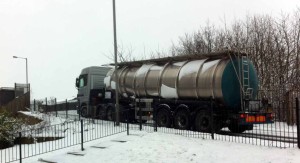 The rationale appeared to be that there had been a considerable salt distribution during the day, the residues of which should have helped keep roads clear overnight.

This judgement seemingly failed to take account of the slight thaw on the Saturday afternoon, the meltwater from which, washed the salt off the roads.

At around midday a tanker became stuck on the approach to a bridge on Leamore Lane for around 45 minutes, causing an obstruction hazard.

Cllr Lee Jeavons, Labour member for Birchills-Leamore commented: “The decision not to grit was unfortunate. I took a short journey from Leamore to Bloxwich on Sunday morning and I can honestly say that in 25 years of motoring I have never driven in such dangerous conditions. Questions must be answered as to why, when we had such conditions, roads remained un-gritted when earlier in the winter we gritted when there was only frost?