Solihull School is to take part in worldwide celebrations for the centenary of the great British composer Benjamin Britten. 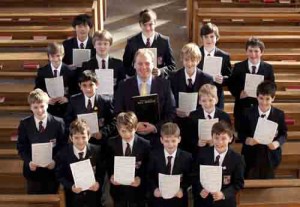 The Boys’ Choir at the independent school in the West Midlands will be singing in Britten’s famous War Requiem at the prestigious Bergen International Festival in Norway on June 5.

The ten to 13-year-olds will be teaming up with the Bergen Boys’ Choir as the only UK school invited to perform the Boys’ Choir part of the powerful work for orchestra, soloists and choirs.

The internationally renowned American Andrew Litton will be conducting the Bergen Philharmonic Orchestra at the Bergen Grieghallen in the first-ever performance of the work at the festival.

Solihull School, which also has a Girls’ Choir and a Chamber Choir made up of Men and Girls, was invited to sing in Bergen through its close association with CBSO Chorus Director Simon Halsey.

The world-leading conductor of choral repertoire helped launch Solihull School’s Former Choristers’ Association in 2012 by rehearsing and conducting a special choral evensong in the School Chapel.

Solihull School has a long association with Benjamin Britten, born in November 1913, as its choristers sang the Boys’ Choir part of his Spring Symphony at its first Birmingham performance at Birmingham Town Hall in 1960.

Britten’s War Requiem was written to celebrate the building and consecration of Coventry Cathedral which was opened in 1962 by HM The Queen on the same day that she visited Solihull School’s newly built Chapel.

Oliver Walker, Solihull School Organist and Choirmaster, said: “Being invited to take part in the Bergen Festival is a terrific honour for the School and is sure to increase even further its outstanding reputation for choral music.”