A photo-documentary exhibition by Martin Jones 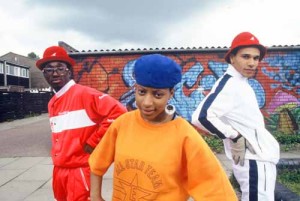 A new photographic documentary exhibition about the early years of UK Hip Hop launches at The Public in West Bromwich on 13 February. Zulu Dawn, by Goldie’s former manager, Martin Jones, will feature over 100 images and testimonies about how the genre developed in Britain.

Running until 6 May 2013, the exhibition looks at the genres musical roots, follows the formation of the first breakdance crews, explains how the dance evolved at All Dayer dance events and in youth clubs, and traces how some of the early artists and dancers achieved fame on TV  and as recording artists.

Images featured in the exhibition include photographs of Goldie as a 19-year-old breakdancer and graffiti artist, travelling to New York to meet his heroes in the South Bronx, and dancing in Central Park. The story ends in 1989 with Martin’s Street 89 festival at Bridlington sea front, a huge celebration of the best the decade produced in Hip Hop art, dance and music.

In the late 1970s Martin was a youth worker at Black Patch in Foundry Lane, Smethwick, and later at Hockley Port, just across the border in Birmingham. When Hip Hop exploded onto the UK in 1982 with Malcolm McLaren’s hit single and video Buffalo Gals (featuring The Rock Steady Crew), Martin’s youth project was inundated with youngsters carrying ghetto blasters, bodypopping and breaking to the sounds of New York Hip Hop artists such as Whodini, Run DMC and Captain Rock. 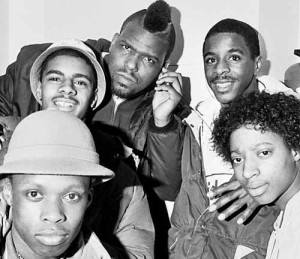 Wolverhampton B Boys with Hip Hop founder Afrika Bambaataa in 1985

He put together a breakdance crew called The Ace Squad who busked in city squares and performed in night clubs all over the Midlands. They were the resident group at Midlands Arts Centre, Cannon Hill Park and regularly attracted over 100 youngsters to their Hip Hop workshops on Sunday afternoons. The workshops culminated in a vast celebration in the park’s open-air Arena called Thriller in the Park.

Martin went on to be agent for the Wolverhampton B Boys breakdance crew, whose members included a young Goldie. Martin secured them TV appearances on BBC Saturday Superstore and ITV Saturday Starship, and a part in the UK Hip Hop film Electro Rock.

When breakdancing faded in popularity, Martin championed Goldie’s rise to fame, securing him his first graffiti art exhibition at Wolverhampton Art Gallery. Goldie and Martin travelled to New York in 1986, filmed by Channel 4 for a documentary called Bombin’. They met the originators of Hip Hop in the South Bronx including deejay Afrika Bambaataa and graffiti artists Seen and Lee. Goldie later found international fame as the pioneer of Drum and Bass music, as an actor in Bond movie The World is Not Enough with Pierce Brosnan, and as Angel in Eastenders.

Zulu Dawn is part of a wider project being undertaken by the newly formed ‘Hip Hop Heritage’ charity that aims to produce a resource for schools, whilst also documenting the photo collection and personal testimonies of the Hip Hop artists for inclusion in a permanent UK Hip Hop archive.

Martin Jones said: “We recently formed a charity in Sandwell called ‘Hip Hop Heritage’.  We aim to inspire the current generation by touring the exhibition in schools and community centres and we’ll be depositing our photo and video records of the era with library archives throughout the UK.”

Linda Saunders, Managing Director of The Public added: “Zulu Dawn paints a fascinating picture of Hip Hop culture in the UK. Hip Hop is an incredibly popular genre in Sandwell, so we fully expect the exhibition to be a huge hit.”

For more information about exhibitions at The Public visit www.thepublic.com or call 0121 533 7161.