Laurence Inman continues his exclusive interviews with the great, the good and the just plain bad.

Last week I interviewed God. This week, for the sake of balance, I’m interviewing The Devil.

–         Eight hundred years out of date my son. These days I look like everybody else. Perhaps more so.

–         It’s always amused me that has. Don’t believe in it? It’s staring them in the face, all day long. People these days! They’re such dim slobs! And proud of it! And angry if you point that out!

–         That he’s given you all free choice. Free choice! If that’s true, why do you always choose what I want? Without fail? Oscar was right.

–         Wilde, you idiot. ‘Most people are other people.’ I don’t think any one of you has ever said a truer thing. Those five words explain everything. If you were truly individuals, like you’ve been told you are, you wouldn’t all go trooping off to that big casino I’ve just had permission to build at the NEC. But you will! You’ll go to a job you hate, trick a bit of money your way, then throw it down a big hole, all because it comes with pretty lights and is called ‘Play.’

–         I want there to be a bit of a challenge in my work, but you lot make it so easy. Tobacco was a good project, but it looks like you’ve come to your senses about that. I think I can keep cars going for a few years yet.

–         And lorries. There’s plenty of human misery left in that particular delusion.

–         Just to keep things nicely ticking over. As I say, there’s never any shortage of whims, fads, impulses and downright lies to keep you lot in slavery and dejection. You dream up most of them yourselves. Or so you think. The mobile phone; stroke of genius! 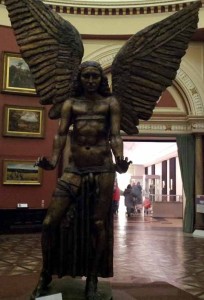 To avoid confusion – this is what the Devil actually looks like.