The architectural splendour of St Chad’s Cathedral in Birmingham is the perfect setting for a concert of rarely performed music by Birmingham Bach Choir. 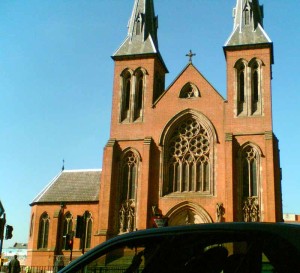 The Responsories first appeared in Rome 1535 and were  part of the ritual of the seminal days before Easter Sunday  until the 1960s (following Pope Pius XII    reform of  Holy Week ceremonies 1955 and the Second Vatican Council when , amongst other changes, the  Easter Vigil  was reinstated as a night office .and  Matins and Lauds were no longer allowed to be anticipated on the preceding evening)

Tenebrae  Responsories (Tenebrae : Latin for ‘shadows ‘ or ‘darkness’ ) was the name given to the special ceremonies of the last three days of Holy Week for  Matins and Lauds – Originally  celebrated in the early hours just after midnight .

Music and candles played a large part in the service.

Whilst the liturgy was sung the only light in the church came from a triangular stand of fifteen candles (representing the eleven faithful apostles, the three Marys, and Christ), plus six candles on the altar.

As each psalm was chanted, a candle was extinguished, so that after the fourteenth psalm only the highest candle (which represented Christ) was still burning. During the concluding recitation (the Canticle of Zachary) the six candles on the altar were also put out one by one until, as the Office of Lauds drew to a close, the only candle which was still burning was concealed behind the altar; thus the church was left in tenebris – in darkness.

The rite symbolised both the darkness which covered the earth as Christ was crucified, and his burial. After the closing prayers the strepitus (Latin for “great noise”) was  made by those present slamming a book shut, banging a hymnal or breviary against the pew, or stomping on the floor, symbolizing the earthquake that followed Christ’s death, then  the candle which had been hidden from view is returned signifying the return of Christ to the world with the Resurrection, and all depart in silence.

Tomás Luis de Victoria’s is one of the best-regarded composers of sacred music in the late Renaissance. His eighteen Tenebrae Responsories for choir and soloists are among his most inspired settings of sacred texts, adhering to strict liturgical form, with six responsories for the second and third nocturns of Matins for Maundy Thursday, Good Friday, and Holy Saturday. Composed in the second half of the sixteenth century the power of this work is said to lie in the balance between the words and his setting of them. Not music for the sake of music, but purely to bring out the meaning of the text with beauty &  expressiveness .

Birmingham Bach Choir will be performing Victoria’s most moving and seldom heard setting of the Responsories in St Chad’s Cathedral, Saturday March 23 at 7.30 pm conducted by Paul Spicer and accompanied by Martin Rawles (organ).