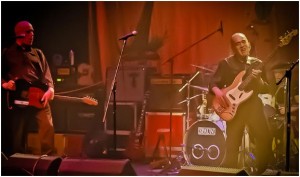 A leading Midlands concert promoter has hit out at “sick and sad” touts who he claims are seeking to profit from a concert by a terminally-ill musician.

Mike Hamblett, owner of the Robin2 club in Bilston, made his comments after tickets for a gig at the venue by legendary r’n’b guitarist Wilko Johnson, recently diagnosed with pancreatic cancer, were discovered being sold on the internet auction site Ebay.

The event, due to take place on 7th March, is part of a short farewell tour by the influential guitarist and is due to feature members of his former band Dr Feelgood, with whom he shot to fame during the seventies. It sold out within hours of being announced, with many tickets being block-booked via the club’s website and later ending up on Ebay, leaving genuine fans disappointed that they would be unable to pay a final tribute to their idol.

Mike then went onto Facebook to apologise to anyone who has missed out and to condemn those attempting to cash in, calling for people to boycott tickets which are being sold in this way. “This is a sick and sad way for people to making a profit and we do not condone it,” he said. Other dates on the sold-out tour have suffered from similar problems, with tickets attracting bids of over £100.