Philip Pullman’s classic children’s novel I Was A Rat! will premiere at the Old Rep Theatre, as part of Birmingham Repertory Theatre’s centenary celebrations, from 12 February to 2 March. 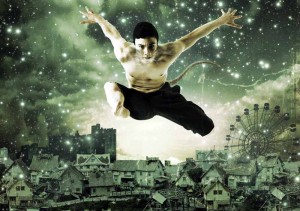 This gloriously dark and gripping story is brought to life on the professional stage for the first time in the UK. Full of music, comedy and fantastic physical performances I Was A Rat! will surprise, delight and move audiences of all ages.

I Was A Rat! introduces us to Roger, a scruffy page boy who turns up one evening on the doorstep of old married couple Bob and Joan. “I was a rat!” he insists! But what is he now? A terrifying monster rampaging in the sewers? A money-spinning fairground freak? A champion wriggler and a downy card? Or just an ordinary boy, though a little ratty in his habits?

This fantastical story has been adapted for the stage by director Teresa Ludovico who is artistic director of Teatro Kismet in Bari, Southern Italy. Teresa is best known in the UK for her thrilling visual and physical productions of Beauty and the Beast, The Snow Queen and The Mermaid Princess.

When asked what drew her to adapting and directing I Was A Rat!, Teresa Ludovico said: “I have wanted to bring one of Philip Pullman’s stories to the stage for some time, because I find his work very close to my poetic style of theatre.  It is a theatre style that strives to address both young and adult audiences.

“I really like this story because despite its fairy-tale structure and wonderful comic appeal, it also deals with contemporary issues, such as the power of society’s institutions, including the press, which creates bogus news, purely for economic or political reasons.”

The REP’s previous Philip Pullman adaptation, His Dark Materials, in 2009 was a huge success with adults and children alike. Combining humour, fantasy and adventure, the moving and darkly comic tale of I Was A Rat! slowly reveals its connection to one of the most famous fairy tales of all time.

On working on an adaptation of a Philip Pullman novel Teresa said: “Philip Pullman has a great gift, just like a master painter.  With a brush of colour he can create a multifaceted character, full of light and shade that I have tried to highlight. I have tried to dig deeper into the temperaments of the characters, so as to make them as alive as possible.”

Leading the ensemble cast as Roger is young actor Fox Jackson-Keen.  Fox made his debut on the professional stage in 2008 at the tender age of 13 in the lead role of Billy in Billy Elliot the Musical and he appeared in a total 201 performances in the award-winning show.

Tyrone Huggins and Lorna Gayle play Bob and Joan respectively. A leading UK actor who hails from Birmingham, Tyrone has performed in over 70 theatre productions at many of the UK’s leading theatres, including The David Hare Trilogy (National Theatre), Noughts & Crosses (RSC), Of Mice And Men (Birmingham Repertory Theatre) and the world premiere of Wole Soyinka’s The Beatification of Area Boy (West Yorkshire Playhouse).

Joining director and adaptor Teresa Ludovico on the creative team will be designer and lighting designer Vincent Longuemare, costume designer Luigi Spezzacatene, composer Frank Moon (music recorded by The Destroyers and played live by the company) and sound designer Dan Hoole.  The English version of the script is by Solihull born David Watson, a writer whose first play was written when he was a teenager, for The REP’s Transmissions programme.

Following its premiere in Birmingham I Was A Rat! will embark on a UK tour including performances in Nottingham, Ipswich, Liverpool and Salford.

Philip Pullman’s
I Was A Rat!
Directed and adapted by Teresa Ludovico
In an English version by David Watson