Following the release of their new album Alone Aboard The Ark, The Leisure Society are embarking on a full UK tour, making a welcome return to the Glee Club Birmingham, Wednesday 17th April 2013. 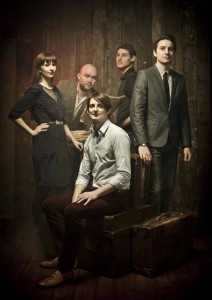 The band are formed of singer-songwriters Nick Hemming and Christian Hardy, along with members of the Willkommen Collective. Prior to The Leisure Society, Nick was in a band with Paddy Considine and Shane Meadows called She Talks To Angels.

Previous albums The Sleeper and Into The Murky Water, included The Leisure Society’s Ivor Novello nominated tracks ‘Last Of The Melting Snow‘ and ‘Save It For Someone Who Cares‘ respectively. Guy Garvey was an early champion of the band via his BBC 6Music show and Richard Thompson invited them to play his Meltdown Festival in 2010.

Following this, Ray Davies of The Kinks personally invited them to perform and record with him as part of the Meltdown Festival at the Southbank Centre in 2011, the same year they were special guests on Laura Marling’s cathedral tour and headlined the Barbican backed by the 30-strong Heritage Orchestra.