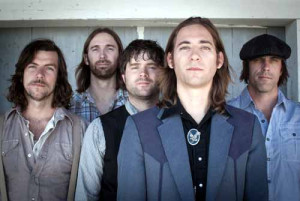 Singer-songwriter Paul Givant grew up on the disparate array of popular musical styles any late 20th century kid did. And in that mishmash of rock, punk, country, pop, rap, and all the rest, it was American Folk and Bluegrass music that rooted deepest, transforming him and his songs. Having played in various rock bands since early high school, in 2004 Paul decided it was time to take his growing batch of old style/new school folk songs, and build them into something greater, more ferocious. The songs were there, volatile, almost flammable, but if they were to attain their potential greatness, he was going to need help.

Through a series of chance meetings and twists of fate Paul hooked up with kindred spirits in Sebastian St. John, Derek O’Brien, Bill Clark, Derek Swenson, and John Kraus and in 2005 they laid the foundations of the band that would soon become Rose’s Pawn Shop. They combined the old style American sounds of Woody Guthrie, Bill Monroe, and Hank Williams, the high energy punk of The Ramones, and The Pogues, and the melodic songwriting sensibilities of Elliott Smith and The Beatles, creating something musically unique.

The final ingredient was added one fateful day when Paul’s scorned ex-girlfriend/former band mate, in an act of revenge, stole the band’s instruments and gear and took them down to the local pawn shop. Priceless. Rose’s Pawn Shop was born…

In spring of 2006 after months of playing live and breaking ground around Los Angeles, the band recorded and released their debut album The Arsonist, which soon won critical praise from numerous print and online publications and they’ve been touring the United States almost non-stop ever since. On any given day you might find Rose’s Pawn Shop playing the Georgia Theatre in Athens, busking the streets of Jackson Square in New Orleans, opening for Jack White and The Raconteurs at the Henry Fonda Theatre in Los Angeles, ripping the walls off the club in their month long residency at the Parkside Lounge in New York City, or hitting the main stage of Floydfest in Virginia. On any given day they’re out there, growing their music, igniting their passion, and converting an ever increasing congregation of loyal fans.

More recently, Rose’s Pawn Shop entered the studio with renowned producer Ethan Allen (Patty Griffin, Counting Crows, Luscious Jackson) to record the second album, Dancing On the Gallows, on which Rose’s Pawn Shop rise to a new level of song craft and sound experimentation, while retaining the same fiery intensity and excitement of their early material.

With wisdom beyond their years, they fearlessly confront traditional country music themes of loss, lamentation, and redemption, while throwing in some drinking-songs for good measure. Sure, they’re borrowing pages from the books of Hank Williams, Bill Monroe, and Johnny Cash, but Rose’s Pawn Shop takes those pages, tears them up and sets them on fire with breakneck speed, bluegrass instrumentation, 3 and 4-part vocal harmonies and lyrics that’ll break your heart.

Whether it’s the dreamy snake-charm-thump of ‘Lone Rider’, the wistful whisky-soaked wisdom of ‘Down The Line’, the honky-tonk ruckus of ‘Funeral Pyre’, or the Gypsy-infused mandolin twang of ‘Reckoning’, Rose’s Pawn Shop will hook you. Like catfish from the creek, they’ll reel you in. And they won’t let you go.

Kitchen Garden Café Tuesday 12th March 2013
Tickets are £10 and are limited.
Click here for bookings: We Got Tickets