Dave Woodhall on the activity, and lack thereof, inside Villa Park. 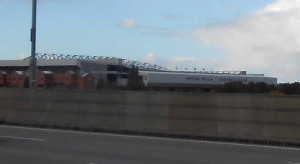 When you’re battling against relegation and playing away to a team with top six aspirations, getting a draw shouldn’t usually be regarded as a disappointment. That is, unless you’ve witnessed the way Villa lost a two-goal lead against the Albion

The game should have been over by half-time, with goals from Benteke and Agbonlahor plus a host of other chances missed against a side who are on a bad run of their own. But if there’s one team you should always fancy yourselves against when you’re losing it’s the Villa. Five minutes after the restart and Albion had pulled one back; the only surprise was that the inevitable equaliser came with just seven minutes remaining.

The first half was the best Villa have played for a long time, the second was depressingly familiar. One mitigating factor was the continuation of what must be the longest epidemic of injuries since the Black Death. Fabian Delph limped off at a time when he was putting in another performance in his best run since joining the club what seems an age ago, while Charles N’Zogbia’s substitution despite a man of the match display was explained away by Paul Lambert as a need to protect him for the battles ahead. Had he not spent such a long time out of the side N’Zogbia might have been able to complete the 90 minutes and the result may have been different.

Having Ron Vlaar back should have brought some stability to the defence while Ashley Westwood’s return is also a boost. Saturday showed that there’s a decent team in there but also that the difference between Villa winning and losing is probably narrower than it is for any other team in the league. The last two away games could easily have provided six points but instead we had to settle for just a couple.

Tuesday night, weather permitting, sees the chance to eradicate the memory of one of the great embarrassing moments in the club’s recent history. If we were playing Bradford in a one-off game we’d be looking to win by at least two clear goals so pulling back the 3-1 deficit from the first leg should be well within the team’s capabilities. I’ve no doubt that Villa can score enough goals over 90 minutes to win the tie twice over and send us to Wembley. I’ll say no more than that.

Of course, everything would seem a lot brighter if we weren’t currently into Day 22 of the transfer window with as much frenzied activity inside Villa Park as on a Birmingham arterial road during a rush-hour snowstorm. In the short-term it wouldn’t take much to sort the team into a comparatively safe position – a solid central defender and a midfielder who could put his foot on the ball would solve a lot of our problems. It beggars belief that those in charge think the current squad is good enough for safety to be assured, yet signals from the inner sanctum seem to indicate that this  is, indeed, the case. They may prove correct, given luck and an injury-free end to the season, but such a gamble is far too reckless and the price of failure way too high.