The Belgrade Theatre’s ongoing commitment to nurturing up and coming talent continues to pay off as Olivia Vinall, who recently starred in the theatre’s production of The Dark at the Top of the Stairs, is to play Desdemona in a star studded production of Othello at the National Theatre. 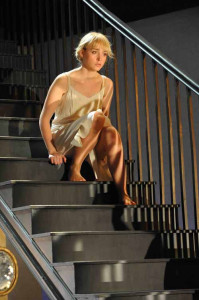 Directed by the National Theatre’s Artistic Director, Nicholas Hytner and also starring Adrian Lester as Othello and Rory Kinnear as Iago, the production is one of several shows being staged as part of the theatre’s 50th anniversary.

Olivia, who is just starting out in her career, won the much coveted role after meeting the National’s casting director following her performance as Reenie in the Belgrade’s adaptation of William Inge’s rarely performed drama The Dark at the Top of the Stairs.

The show ran in B2 in October last year and Olivia’s performance was acclaimed by both local and national theatre critics, including Dominic Cavendish from the Daily Telegraph, who praised her ‘especially laudable performance’.

Olivia said if it wasn’t for her role in The Dark at the top of the Stairs then she might never have got the part, “It really is a dream come true for me and all thanks to the Belgrade for producing and supporting lesser known, but incredible pieces of writing. It’s good to know people value risks, and without that I wouldn’t be about to start this epic adventure.”

Olivia is following in the footsteps of a number of hugely successful actors who have begun their careers at the Belgrade, including Sir Ian McKellen, who had his first job in a Belgrade production of A Man for All Seasons in 1961. He went on to appear in 15 Belgrade productions before moving on to perform in theatres around the country, including the National Theatre and the RSC.

Other actors include Richard Briers, Sheila Ferris, David Suchet, Joan Plowright, Rosemary Leach, Lesley Joseph, and not forgetting Coventry born, Hollywood actor Clive Owen, who got his first taste of acting as a member of the Belgrade Youth Theatre. Director Trevor Nunn and the RSC’s previous Artistic Director, Michael Boyd are among some of the acclaimed directors to have honed their skills at the theatre.

Whilst tickets are not yet on general sale, Othello is due to run at the National’s Olivier Theatre from April 2013.