Look out for shoppers in their pyjamas in Lichfield city centre this Saturday morning – January 26th – as the Lichfield Players brave the elements in their nightwear to promote their next show. 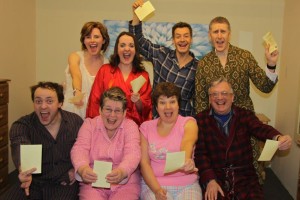 Members of the cast of Bedroom Farce will be handing out special flyers offering theatre-goers discounts on tickets for the production’s opening night.

“Bedroom Farce is one of Alan Ayckbourn’s best known comedies,” said director Barrie Atchison. “We thought it would be a great idea to put a smile on audience faces before the curtain goes up by giving people the opportunity to get £2 off tickets for our 30th January show. Anyone with a promotional flyer can redeem their discount if they book their tickets at the Lichfield Garrick Theatre Box Office on Saturday 26th January.”

Bedroom Farce follows the hilarious antics of four couples in three bedrooms over the course of one action-packed night.  There are celebrations, DIY disasters, rows and illicit kisses as well as a host of relationship debacles all fuelled by deliciously dysfunctional duo Trevor and Susannah.

The Lichfield Players present Bedroom Farce in the Main Auditorium of the Lichfield Garrick from Wednesday 30th January to Saturday 2nd February.