West Midlands Police are to pay tribute to the bravery of their officers. 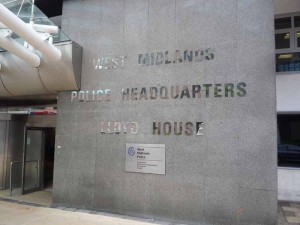 A special memorial to officers who have died while on duty is to be officially unveiled by West Midlands Police. The roll of honour will pay tribute to the 89 officers that have died since 1822 while on duty in Birmingham, Coventry and the Black Country.

The memorial will be officially unveiled in reception at police headquarters, Lloyd House, by Chief Constable Chris Sims and Police Crime Commissioner Bob Jones, at a ceremony on Thursday 31st January. Detective Sergeant Steph Bradley, whose brother tragically died on duty, will speak on behalf of the relatives who have been invited to attend the ceremony. The force chaplain, John Butcher, will also be in attendance. Chief Constable Chris Sims said: “Although there are a number of local tributes across the force area in memory of officers who have lost their lives while on duty, this is the first time that a force memorial has been erected which brings together the names of all the officers. We are proud of these officers and it is right they should be remembered”

DS Steph Bradley, whose brother PC Ryan Hunt died in May 2006 in a traffic collision while working on an investigation in South Yorkshire, said: “This memorial will be a fitting and lasting tribute to every one of those officers who made the ultimate sacrifice. It will be a great honour to represent the families.”

All officers who have died on duty will have their names, age and date of their death placed on the board. This includes officers who have been killed on duty, have died through accidents or have been killed in road collisions. The memorial dates back to 1822, when Wolverhampton night watchman Richard Cooke was killed after he was fatally hit on the head by a stone while intervening in a street affray.

Also mentioned are the 32 serving officers who lost their lives in World War II, including 16 Coventry officers, eight of whom died during an air raid on the city on 14/15 November 1940. Sixteen Birmingham officers who died during the war are also commemorated.

Ian Edwards, chairman of West Midlands Police Federation, commented “These officers have given their lives while serving their communities, fighting and preventing crime, keeping the peace and protecting the vulnerable. This roll of honour will be a permanent reminder of the debt of gratitude we all owe to them.”

A roll of honour which commemorates those officers who died during World Wars I and II will remain in its current location at Lloyd House.