Andy Munro reports on what might be the end of an era for Blues. 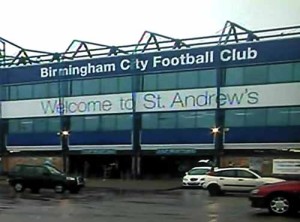 A great goal from Marlon King sealed an excellent three points at Turf Moor but the fear is that this might be Marlon’s last match along with that of the other goal scorer, Curtis Davies. Both are absolutely vital players in vital areas of the pitch. The current hope is that it’s damage limitation and we just lose Butland and nobody else. Maybe Pannu will decide that if he can get away with selling just one player then it will not only keep us out of administration but leave the club in a saleable state. Certainly even he must see the logic of keeping the side relatively intact so we hopefully avoid the relegation scenario, because if we do get relegated, then that will undoubtedly have a massive effect on the value of the club.

Credit to Clarke for setting up the side in a sensible fashion and playing with two natural wingers on their natural side. This they could afford to do with a deep lying Elliott. Now I’m not one of Wade’s biggest fans but fair play to him for his recent haul of spectacular goals. In fact it made sense to play him against his old club on the basis that he would be anxious to impress and show that he hadn’t lost it. Meanwhile the defence is now becoming a recognisable and fairly solid unit, presuming that Robbo stays, although we still don’t seem to be able to keep a blank scoresheet. In midfield, the Gomis/Reilly partnership is a solid grafting combo but a box to box player would be ideal. In the meantime Callum Reilly will, as any youngster does, have a dip in form but he appears to be a very good prospect.

As usual Big Zig came off the bench to make a difference although, a bit like Redmond, he seems better in that ‘impact’ role. Whilst this role must be pretty galling for the big Serbian, he’s only got himself to blame. In fact it is likely that if one were to tot up the paucity of his minutes spent on the field of play in relation to his wages, he might arguably be more expensive than Messi! Still he’s our Carling Cup souvenir and in some ways throwing on a big fella adds spice to any match. His bumbling awkwardness is almost likeable and he can’t be blamed for a financially incompetent decision by Carsson and Co.

Next up is Forest and with the heat being turned up a few notches on the board, the return of the Ginger Judas and with Forest usually bringing a large away contingent, the atmosphere should be red hot.