Talented students on Coventry University’s globally-renowned automotive and transport design course worked with the BBC’s Top Gear show to design the smallest car in the world, as driven by Jeremy Clarkson in the first episode of the new Top Gear series yesterday. 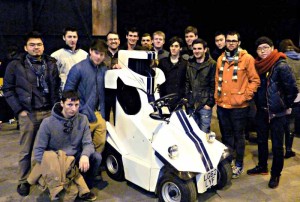 The team of Coventry University automotive design students see their handiwork in the flesh at the Top Gear studios last week.

Thirteen undergraduates from the School of Art and Design’s famed car styling course were commissioned by Clarkson and co to produce a range of detailed design concepts to meet Top Gear’s vision for a realistic, road legal microcar that suited the show’s entertaining, tongue-in-cheek tone.

The Coventry-designed car – named the ‘P45’ – was featured in the show alongside the new Pagani Huayra supercar and an appearance in the ‘Reasonably-Priced Car’ by Golden Globe award-winning actor Damian Lewis.

The budding designers had just a week to produce the material and present it to the Top Gear team, and after a number of design stages involving all of the students, the concept drawings were whittled down to two on which the vehicle would be based.

The chosen designs – which were produced by students Thomas Lumley, 21, from Coventry, and Mike Antoniazzi, 21, from Cardiff – were then used to build a lightweight vehicle which can be driven on the road under current quadricycle rules.

In the opening episode of the series Clarkson pilots the P45 around the streets of central London – including excursions through the Dominion Theatre and the British Library – in a bid to go one better than his feature from series ten of the show in which he drove a Peel P50 around the BBC’s headquarters. 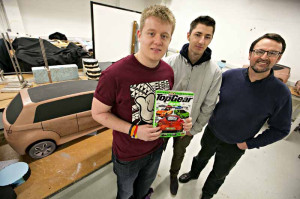 All of the students involved with the P45’s design were invited to the Top Gear test track and studios in Surrey last Wednesday to watch the show being filmed live and see the vehicle in the flesh for the first time.

Thomas Lumley, who grew up in Coventry and attended Finham Park School in Cheylesmore, said he wanted to study automotive design ever since visiting Coventry University as a young boy.

Thomas said:  “It was incredibly exciting and a real privilege to work on a project for the Top Gear team. To be involved with this kind of opportunity has been an ambition of mine ever since I attended an open day at the School of Art and Design when I was thirteen years old. From that point onwards, everything I did was geared towards studying automotive design.

“To say this project was a challenge would be an understatement, as we had a very tight timescale to work to and had to complete it alongside University coursework. Quite a lot of background research went into it, as we were asked to make the car comply with microcar regulations but also design it so it fitted with the comedy element of Top Gear. It was a great chance to show off what we could do, and it’s a real honour that they chose one of my designs to work with.”

Brian Clough, senior lecturer in automotive and industrial design at Coventry University, said: “I was immensely impressed with the way all of the students rose to the challenge set by the Top Gear team, particularly since many of them were in different countries when they first heard and only had a week to pull their ideas together. It wasn’t an easy brief as they had to strike the right balance with a design that was both authentic and humorous. Although Thomas’s and Mike’s design were ultimately chosen, this was a great team effort by all those involved, and an unforgettable experience.”

Coventry University’s Automotive and Transport Design BA (Hons) degree enjoys global renown, and has a reputation for producing graduates who go on to top design positions in industry – examples include Mark Fetherston, head designer for Mercedes-Benz, and John Iley, chief aerodynamicist for the Caterham F1 team. The University also runs the world’s only MA in automotive journalism.

Last night’s Top Gear episode can be watched on BBC iPlayer until the end of March: http://www.bbc.co.uk/i/b01qh2xl