Shoppers at Realwoods Traditional and Contemporary Furnishings in Lichfield this Saturday may find one of the beds temporarily occupied as the Lichfield Players hold a photo shoot to promote their forthcoming production. 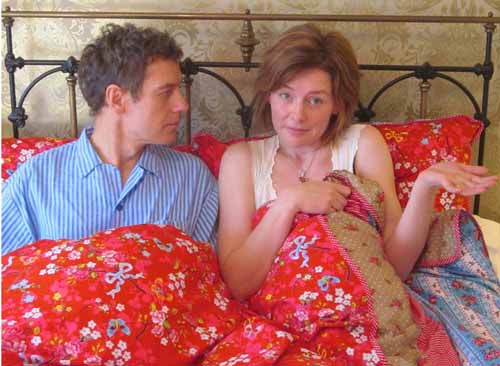 The society are performing Alan Ayckbourn’s hit comedy Bedroom Farce for a four night run at the Lichfield Garrick at the end of the month.

“The play follows the hilarious antics of four couples over the course of an evening and the action flits between three bedrooms which the audience see simultaneously on stage,” said director Barrie Atchison. “We really wanted to get some promotional shots of each couple in character, and Realwoods kindly agreed that we could use their showroom.  Members of the public are very welcome to join us at the Britannia Enterprise Park venue at 2pm on Saturday 12th January to watch the shoot, talk to cast members and find out more about the play. We’re also very happy to answer any enquiries about future acting and backstage opportunities with the Players.  And to make it even more interesting the cast will all be in costume, which means pyjamas and nighties at 2pm!”

Bedroom Farce focuses on four couples and one incident-packed night.  Ernest and Delia come home after a disastrous meal to celebrate their wedding anniversary in bed with pilchards.  Malcolm and Kate are getting ready for a big house-warming do.  Jan’s invited but she’s at home with injured Nick who’s stuck in bed. Start the party and throw in the marital disasters of Trevor and Susannah and it’s not long before they weave in and out of other couples’ bedrooms with chaotic effect!

The Lichfield Players present Bedroom Farce in the Main Auditorium of the Lichfield Garrick from Wednesday 30th January to Saturday 2nd February.