Acclaimed artist Mike Nelson is no stranger to the Midlands having been born in Loughborough in 1967. Today though he is based in London and has become widely regarded as one of the most important artists working in the UK. As well as being invited to exhibit in major galleries around the world he has been nominated twice for the Turner Prize and in 2011 represented Britain at the Venice Biennale, the largest festival of art in the world.

From 12th January to 9th March Eastside Projects, a contemporary art gallery in Digbeth, will play host to his first major solo exhibition in his home region. Returning to the Midlands, Nelson has decided to take on the M6, the transport artery that leads to, through and from Birmingham.

Eastside Projects’ large main gallery has been completely given over to the artist and the M6 has been scoured for exploded tyres, the result of blow-outs from the huge trucks and lorries that race along the motorway. These routinely thrown away objects remind us of both the achievements of industry and the dangers of our rapid use of resources. 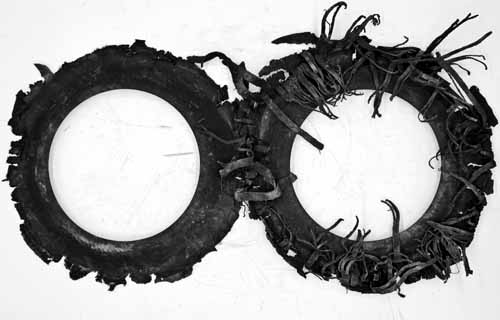 Surprisingly fascinating the twisted rubber remnants will be presented on a huge concrete platform, displayed like trophies as a unique monument to Birmingham’s historical position at the centre of the British transport system.

Mike Nelson said: “M6 is a work that I’ve been meaning to make for over fifteen years. When I first thought it up the location of the work was in flux so the title could well have been something else, somewhere else.  However due to Birmingham’s status as our ‘motor city’ and the industrial locale of Digbeth this is the perfect place to finally realise it.”