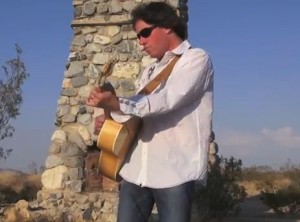 Joe Silva is a singer-songwriter from who first came to prominence in the eighties with his band the Threats. Recently he’s been carving out a career as a solo artist, and he’s currently touring with the Alarm’s Mike Peters. If you like stuff such as Crowded House and Squeeze you could do worse that check out his debut album, Blue. He’s also, as we found out, got a tale or two to tell about the struggles of a musician.

Your career has cost you a lot, both in financial and personal terms. To sacrifice your marriage as you did, then to relocate thousands of miles from home when you moved to California, you must feel very passionate about music.

“Yes, it does take a great deal in all manner of ways. It’s a difficult life for a partner to accept. There’s a lot of travel, a lot of hours rehearsing or TV studios, but on the fortunate side being a songwriter meant all these heartbreaks have given me material to write about. I was offered a job in Los Angeles, I figured I’d have enough to rent an apartment and that if I was doing the same type of shows I’d been doing on the east coast I could more easily get a record deal. I was opening for bands like Joan Jett and the Monkees and I’d been flying to LA a lot to do other shows so I reckoned that if I did the same on the west coast a record company would surely find me. Unfortunately the job fell through, then I struggled trying to find any work anywhere. I made friends on the cast and crew of the TV show Married with Children so I could go and eat with them on their set and that kept me alive.

“I had five dollars to my name and I walked into this little brown church I’d never really noticed before and I prayed, I didn’t want to go home but what am I going to do here? As I left the church I went to the convenience store over the street from my apartment and there was this homeless man sat there. I went in and bought a burrito, my last meal if you like, and I had a dollar and change left so I gave it him. He said ‘Thanks Joe,‘ I asked him how he knew my name and he pulled out of this shopping trolley that held all his possessions a newspaper  I’d thrown out when I was getting rid of stuff from my girlfriend and the band. He’d found this newspaper while he was going through my trash, he’d grew up in the town where the newspaper came from so he kept it as a reminder of home. He told me he’d grown up in an orphanage, ran away at sixteen and ended up in LA. He’d got work but his equipment was stolen, he had no insurance, no family and went on the streets. I told him about my life and he said ‘You have to go home otherwise you’ll end up like me.’ That was just the word I needed to hear so I back, put the Threats together again and started playing bigger shows, doing TV then there was more interest in me as a solo artist.”

“I’m driving round in a camper van. I came over, got detained at immigration because I didn’t have the correct paperwork and we ended up having to call round to get it sorted. This meant I got to the camp site late on, I needed somewhere to shower and wash my clothes, I got there at 10.30 and the gates were closed. I called the emergency number and this very unhappy man came to the gate and opened up, showed me the spot and said no electricity until morning. So I curled up in a ball in my van and slept for one hour. The first gig I did was on an hour’s sleep, the next night wasn’t much better. “

You’re playing with Mike Peters, who has been an obvious influence on your life and music. How did the connection come about?

“One day I picked up the Alarm’s Declaration album which is chocked full of anthemic songs about hope and strength and everything you wish for in your life. After that I tried many times to meet Mike without success, then the Alarm played my home town, we opened for them and we got to be good friends after that. Mike is such a positive person, such a fighter, you can’t help but feel good in his presence. His lyrics are so positive, there isn’t a single negative thing about Mike Peters and his songs.”

You can’t help but feel that someone so full of enthusiasm for the power of music should be a worldwide star, playing packed-out stadia around the globe. Instead we have Bono…

“I don’t want to talk negatively about anyone, but when a guy is unpopular even in his home town….  I know he and Mike toured together in their early days and I can’t figure it out – why one and not the other? When a venue says the show has to close now because it’s past curfew so the artist goes out and starts singing in the parking lot in the snow, as I saw Mike in New York do, that’s a special person. It’s like a gospel show, when everyone in the congregation is inspired and enthused, and bursts into song. He’ll start singing the opening line to a song and the whole crowd takes over.”

The Threats were very much that big songs, stadium rock type of approach, whereas your solo work is a lot more introspective. Is this an age thing, where you’ve used your experiences to influence your songs?

“With the Threats I was writing their stuff and also things for myself that I held back while I was with the band. I was getting old and realising that you can keep playing the same thing like the Rolling Stones but I made a decision that I had all these other songs I wanted to play.”

Your recent album Blue was recorded in the Sun studios in Memphis. That must have been an experience.

“I’ll never forget it. I spent a week there, and the studio hasn’t changed at all. You’re standing on the same tiles where Elvis, Jerry Lee and the rest recorded. You can imagine them doing their recordings there while you’re doing your own. Then the day the recording ended the guy who recorded the last Johnny Cash album came in to do a session with some musicians from Nashville including Johnny’s son in law and they were all wearing Johnny’s actual clothes because they were recording a video. So to hang out with these guys knowing my album was in the can and hear all the stories about Johnny Cash was very surreal.”

And also payback, in kind, for a career that has taken a lot out of Joe Silva and not, as yet, put back as much as his talent deserves.