A chance encounter between two business entrepreneurs has led to the opening of a stunning new gastro bar and restaurant in Warwick.

‘High Pavement’, the brainchild of Paul Brown and Johan Ventur has caused a stir in the historic town since opening last month not only for its unique menu of British cuisine and cocktails inspired by London and New York, but also for its stunning bespoke interior created by multi-award winning designer Steve Howie.

Renowned for his high profile projects including Stringfellows and Turnhills nightspots in London, Howie has turned the 16th Century venue in the High Street into a luxurious 80-seater restaurant and bar. 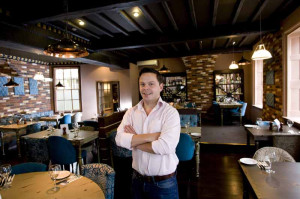 He has used his artistic skill to combine the best of the outstanding traditional oak, wrought iron and brickwork features with contemporary soft furnishings, creating an eclectic, relaxed setting perfectly suited to the dining offering.

Customers can select from an extensive cocktail menu including a creation of orange blossom vodka sour topped with earl grey foam.  A selection of wines, continental beers and locally sourced ales are also available.

The launch of High Pavement – its name a link to the historical original name of the High Street – has fulfilled a lifetime ambition for enthusiastic proprietor Paul Brown, whose passion for the hospitality industry was ignited as a teenager working part time in a restaurant in his home town of Newcastle.

Paul said: “It was hard work but I just knew this was the career I wanted and dreamed of one day running and owning my own restaurant.

“I think it was fate that so many years later I should meet up with Johan and that my dream would become a reality.

Prior to opening High Pavement Paul worked in a number of well-known restaurants in Warwickshire and lives locally with his wife.

High Pavement is open daily from 11am until 11pm and will shortly introduce a Christmas menu of traditional homemade fayre.