Ever wondered what it’s like to be down to your last billion? Dave Woodhall found out. 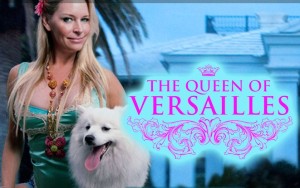 I don’t think David Siegel would like the Stratford Picture House, where some of the seats looked like survivors from being slashed at an original showing of Blackboard Jungle. Siegel and his family are the focus of this documentary, a story of the American Dream gone bad. He’s in his seventies at the beginning, with a trophy wife, eight children, and about to open a new hotel in Las Vegas. Siegel is the king of timeshare but like all kings he needs a palace. In his case it’s in Florida, named Versailles, based on the French version with a nod towards Disneyland and when it’s complete it will be the biggest family home in the States. David boasts of having single-handedly won the Presidency for George W. Bush in 2000 (“but don’t ask me how, it may not necessarily have been legal”) and of the new hotel possessing the brightest sign on the Vegas Strip. David is not a modest man.

For the first half-hour this film shows the somewhat unorthodox life chez Siegel. They’re seriously, stupendously rich, but don’t exactly act the part. Their existing home, a mere 26,000 square feet and “bursting at the seams” according to gold-adorned and silicone-implanted wife Jacqueline, is shabby and the family appear to get most of their meals from McDonald’s or the local pizza house.

Then recession hits, work has to stop on Versailles and the hotel trade collapses as Seigel lays off 7,000 staff. The family make ‘economies’ – on a scheduled flight for the first time, one of the children wants to know what other people are doing on their plane. They shop at Walmart, albeit filling a 4×4 with Christmas presents, while the household falls apart as domestic staff are let go and the family have to more or less fend for themselves. Pets die because no-one feeds them, Jacqueline’s dogs foul the carpets, two puppies go missing, presumed eaten by a semi-domesticated python. They cannot believe that they won’t personally be bailed out by the government. After all, none of this is their fault; blame the banks for loaning cheap money, even though David boasts that his timeshares were sold to people who could barely afford the downpayment.

While there are no Oscar-winning performances in front of the camera, Jacqueline’s bra deserves at least a nomination for Best Support. This is a woman who will emerge from any triumph or disaster much the same; tanned, immaculately-coiffeured and attached to the wealthiest male survivor. Yet it’s she who emerges with at least some credit. We learn that she’s already taken in a niece whose parents abandoned her and later gives money to an old friend facing eviction. Jacqueline may not win any Mother of the Year awards – she talks about ‘visiting’ the children at the completed Versailles and hands a daughter barely out of the toddling stage a pile of glass plates to carry – but she battles to keep the family unit functioning. David, in comparison, grows increasingly isolated as he resists pressure from family and business associates to file for bankruptcy. You wonder whether his prime motive is simply to avoid the public loss of face a failed business would entail. Despite the thirty year age gap he’s the one who looks least committed to their marriage.

David and his eldest son Richard complain about how they both now struggle to make ends meet. Their Filipino nanny is delighted to live in a play house the children have grown out of and talks of a son back home that she hasn’t seen for 17 years. Jacqueline buys a $2,000 jar of caviar as a present to herself, continues to shop for items the family don’t need and may never know they own and has Faberge eggs amongst the thousands of items kept in storage. David is now suing director Lauren Greenfield for misrepresentation. Good luck with that one.