A local boxing champion is backing fund-raising for a young peoples’ charity. 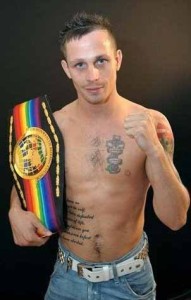 Super-flyweight boxer Don Broadhurst has taken a short break from the ring in a bid to support Youth Clubs around Birmingham, encouraging people of all ages to attend the Birmingham Association of Youth Clubs (BAYC) Autumn Ball on the 26th October.

The 28 year old from Erdington is turning his passion for youth clubs into action for the fundraising event that takes place at the Holiday Inn, Smallbrook Queensway, Birmingham at 6pm.

“My local youth club changed my life, it gave me a space to channel my energy and escape from my rough council estate, without it I would never have succeeded in boxing. It’s very important to me that clubs stay open,” the Commonwealth Games gold medalist said.

The Autumn Ball is a fundraising extravaganza for BAYC, a charity which has been supporting youth clubs throughout the West Midlands area for over 114 years. The evening consists of a four-course meal, live entertainment provided by talented local youth artists and a keynote address from Deputy Lord Mayor of Birmingham, Councillor Anita Ward.

BAYC’s chief executive Michael-Don Smith adds, “With significant cuts currently being made to the youth service, now is an important time for the people of Birmingham to join forces for the future of youth clubs in this City. The Autumn Ball is a chance to re-engage and reconnect with BAYC, and most importantly help us to empower those that empower young people.” 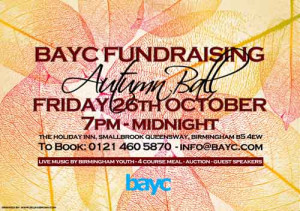 Tickets for the BAYC Autumn Ball are on sale at a cost of £40 each, with special discounts for youth organisations, if you would like to attend, please call 0121 460 5870 or email: info@bayc.org.