Instrumental aficionados can read on in Glee…. 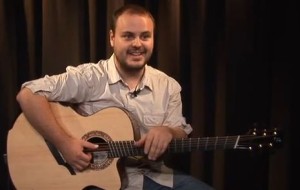 Three of the world’s most accomplished acoustic guitarists have announced will unite for a major 20-date UK tour in September  and October, including a date at Birmingham’s Glee Club. Guitar Masters Tour is an opportunity for music fans to enjoy marquee virtuosity in a living room-concert setting and features internationally renowned musicians Andy McKee, Preston Reed and Jon Gomm. The three will share an all-acoustic bill, jam, play their calling-card tunes and reveal their formative influences and. signature guitar techniques.

Andy McKee is one of the world’s finest acoustic guitar soloists. Having shot to worldwide prominence with his technically astounding Drifting, he has since received over 200 million plays online. He performs over 200 shows a year worldwide, has independently released five studio albums and was awarded the Acoustic Guitar Magazine worldwide silver medal award for fingerstyle.

Hailing from Blackpool, Jon Gomm is a singer-songwriter who accompanies himself with polyrhythmic hitting-on-side-of-the-guitar drumming and who is known for his on-the-spot detuning to quickly access unavailable bass notes. According to Acoustic Magazine he is one of the world’s most successful, gifted and inspirational guitar players. His track Passionflower recently went viral after being tweeted by no less than Stephen Fry. Since then it has received over 2 million views and Jon has appeared on BBC Breakfast, The One Show and been featured in numerous national newspapers.

New Yorker Preston Reed tweaks the nose of musical convention, pokes the eye of accepted wisdom and burns the rulebook of the past. His unique style is impossible, unfathomable, unthinkable, as with blurred hands he taps, tickles, slaps and soothes his instrument to create a sonic landscape.

The two-year-old Guitar Masters Tour has clocked up 347 shows, and continues to combine technically masterful acoustic guitar performances with artist’s workshop accessibility for an engaging and participatory fan experience. It’s coming to the Glee Club on 23rd September.