A quirky fundraising project dreamt up by Birmingham-based music charity Sound It Out has the glitterati of the UK’s entertainment industry flocking to support it. 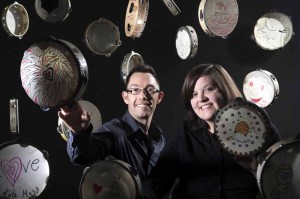 More than 45 stars spanning the arts, film, TV and sporting arenas have come out in support of the Tamperine project, an inventive fundraising initiative where celebrities were asked to ‘doodle’ on tambourines. These will be featured in an exhibition next month [17-26 May 2012] in Birmingham’s Mailbox coinciding with an eBay auction to raise money for the charity.

“We suffered from some of the public funding cuts to the Arts during 2011 and have needed to be creative in raising our profile and getting support from people” says Matt Daniels, CEO of the charity.

Sound It Out uses music as a medium to make a real difference to people facing challenging circumstances in some of the most deprived communities across the West Midlands. The charity delivers positive activities to people most in need in settings such as hospitals, community centres, schools and young offenders units.

Nicola Briggs, Lead Programme Officer at Sound It Out, came up with the idea for the project whilst stuck in M6 traffic on her daily commute, and has been overwhelmed by the response: “We have been amazed at just how supportive some of the UK’s biggest stars have been – we’re incredibly grateful that this project has captured the imagination of so many.

‘’There has been such a buzz amongst staff each time a parcel arrives in the post – we’ve all been guessing which celebrity it might be, taking it in turns to open each parcel as the tambourines have kept on coming and coming!’’

Nicola continues: “We hope that this can start the beginning of a wider fundraising programme that encourages support from everyone to help us keep doing the good work we do”.

The Tamperine Project will be launched with an official exhibition opening in the Mailbox on Wednesday 16 May, running until 26 May and the online auction coincides live on Ebay from 16–26 May.