On Friday 11 May a hilarious and touching play about two of Britain’s most colourful wrestlers, heads to The Public in West Bromwich. 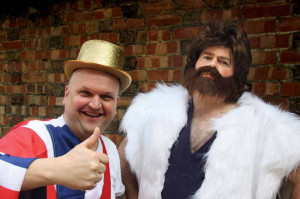 ‘Big Daddy vs Giant Haystacks’ is a nostalgic portrayal of the enormously popular figures, by award winning writers, Brian Mitchell and Joseph Nixon.

At 4pm every Saturday, from 1976 to 1988, tens of millions of Britons, and countless more world-wide, were in the grip of an extraordinary sports phenomenon: watching two men (a.k.a. Shirley Crabtree and Martin Ruane) pretend to fight each other.

This new play, by the award-winning writers of New Perspectives’ hit Those Magnificent Men, brings back the grunting, grappling life these two well-loved wrestling rivals and the bizarre world they lived. With an “all-star cast of thousands” including Paul McCartney, Chris Tarrant, Frank Sinatra, Princess Margaret, and Greg Dyke, this ambitious, touching, hilarious two-hander conjures up a whole nation during its most colourful era.

Featuring Latest-7-Award and Herald-Angel winner Ross Gurney-Randall (Follow Me and Goerring’s Defence – Guy Masterson Productions) and Radio 4’s Count Arthur Strong’s Radio Show regular David Mounfield, Big Daddy Vs. Giant Haystacks promises to be the bout of the century and a comedy drama not to be missed.

Big Daddy Vs Giant Haystacks takes place at The Public on Friday 11 May at 7.45pm.