Four members of staff from Birmingham Heartlands Hospital have been chosen to carry the Olympic flame in Coventry this summer. 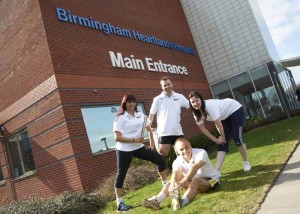 Consultant ophthalmologist, Ian Cunliffe, radiographer, Theresa Duffy, fundraising manager, Richa Gautam, and graphic designer, Stuart Hudson, have been chosen to be among 8,000 inspirational people nominated nationally to bear the torch on its journey around the UK.

The lucky four were chosen to shine a light for the West Midlands in recognition of their work to set up a sports initiative to promote health and well being among the 10,000 staff at Heart of England NHS Foundation Trust.

The sports programme was created in line with the national NHS 2012 Challenge to encourage NHS staff to improve their health through physical activity. The Department of Health Initiative was inspired by the London 2012 Games and is a response to Dr Boorman’s health and well-being report to encourage NHS staff to use physical activity as a means to get fitter and be better role models for patients.

Mr Ian Cunliffe said: “It is an honour to carry the Olympic torch – for me it’s a real tribute to the effort the whole team has made in developing and working on the NHS Challenge. The NHS Challenge aims to get staff healthier and fitter through a whole range of physical activities and it has proved to be a real hit with staff across our three Hospital sites.”

The London 2012 Organising Committee nominations process for torchbearers ran from May to June 2011 and selection panels were held around the UK in the autumn.  Tens of thousands of nominations were made to the Committee before the selected torchbearers were finally announced.