A live specimen of the world’s most deadly spider was captured in a Coventry warehouse on Monday, and brought to Coventry University student Brian Cochrane’s KBN Reptiles store in the city centre for identification and safekeeping. 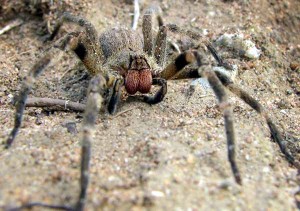 The Brazilian Wandering Spider – otherwise known as the banana spider – was delivered to third-year BA Enterprise and Entrepreneurship student Brian, who started up his exotic animals shop in the City Arcade last year.

Brian, 23, from Stratford-upon-Avon, immediately contacted experts at Stratford Butterfly Farm for confirmation that it was a species of the genus Phoneutria, a classification of aggressive and highly venomous spider found in tropical South and Central America. 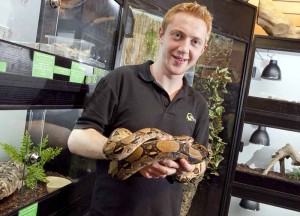 The spider is now on display in one of the Butterfly Farm’s infamous ‘Nasties Tanks’, which also house a Black Widow Spider, a selection of scorpions and a venomous centipede.

Brian, whose Coventry store specialises in the keeping and welfare of anything from snakes and lizards to tarantulas and tortoises, knew straight away when he saw the spider that it was no ordinary arachnid.

Brian said: “The Wandering Spider is quite distinctive and I had a fair idea what it was when it arrived in our store. It was very exciting! It’s formidable looking, which is a good thing because humans should be very wary about approaching them. They’re aggressive and won’t hesitate to bite, and their venom is highly toxic.”

Katie Hodgkins, Brian’s business partner at KBN reptiles, said: “It’s not unheard of for spiders like this to find their way into the country in a bunch of bananas. In fact that’s how it earned its nickname, the ‘banana spider’. It’s a dangerous arachnid and not the kind we keep in our store, so we took it to the Butterfly Farm in Stratford where people can enjoy seeing it from safety.”

The Brazilian Wandering Spider’s toxic bite is reckoned to be 18 times more potent than that of the more widely-known Black Widow – an untreated bite could kill a human in 25 minutes. However, due to the availability of anti-venom, fatalities from Wandering Spider bites are increasingly rare.