Birmingham City Councillor and Cabinet Member for Leisure Sport and Culture, Martin Mullaney, has written an update on the state of of Moseley Road baths.

The date for the re-opening of Moseley Road baths has been put back to the New Year, following the discovery of large amounts of loose asbestos in the basement area.

My last blog update was on 25th July and can be seen  here.

The following is a brief update on where we are with re-opening Pool 2.

The asbestos survey was completed in mid-August and confirms that there are substantial amounts of loose Amosite and Chrysotile asbestos in the basement. Both types of asbestos are the most hazardous type of asbestos. Bits of gasket containing asbestos and flaks of rust covered in asbestos material have over the years laid on the floor of the basement. During that time, the basement has flooded several times, with the loose asbestos spreading throughout the basement, mixed in with other debris.

I attach a photo of a photo from the asbestos report showing gaskets and flaks of rust lying on the basement floor that contain Chrysotile asbestos. 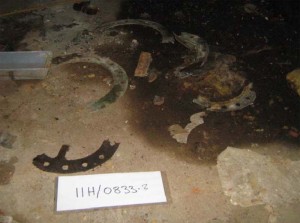 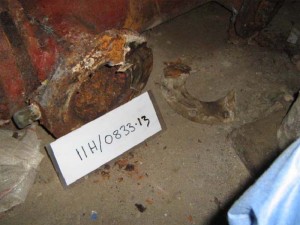 All this asbestos needs to be removed, before the work on installing the permanent props begins.

The cost of removing the asbestos will be £80,000 and adds 10 weeks to the programme. We hope to have the money signed off next week and with the installation of the permanent prop, we expect pool 2 to be open after Christmas 2011, subject to no further problems being found.

I have enquired as to whether we need to do any more asbestos surveys in the rest of the building. I am assured that over the years all other parts of Moseley Road baths have had asbestos surveys and the basement was the only section not to have been surveyed.

I have also asked for the Asbestos survey for the basement to be checked to see if it can be made public on request. I hope to have an answer on this next week.