Businesses which suffered during the riots earlier this month have been informed they may be entitled to assistance from local and central government. Birmingham-based business people met city representatives during a meeting at the Council House on Wednesday, when they were informed of a package of assistance which has been made available. 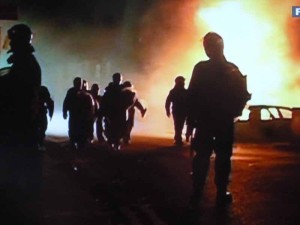 Traders were told about the High Street Recovery Scheme, which provides help to enable affected small and medium-sized businesses recover more quickly than may otherwise have been possible. Aimed at concerns with fewer than 250 employees worldwide and annual turnover below £11.2 million, funds are available to help with losses incurred as a direct result of disorder between 6th-11th August. These include such things as temporary accommodation, insurance excesses, emergency repairs and additional security measures. In addition, the council already has discretion to reduce all or part of a business rates bill.

Speaking to thebirminghampress, Cllr Timothy Huxtable, cabinet minister for transport, environment and regeneration, said “We will be working out what needs to be done and whether businesses will benefit most from help in kind or more direct measures such as grant aid. Many ideas will be considered to help promote Birmingham and to get people back into the city centre. These will be carefully considered and not just knee-jerk reactions. We want to provide a hand-up, not a hand-out.”

Although the deadline for applications to be made is 9th September, Cllr Huxtable admits that this may not be entirely practical. “We would hope that the government will show some flexibility. For example, if a business has lost documents in a fire, these are obviously extenuating circumstances and some leeway should be allowed. It will also be difficult to calculate just how many businesses and trades were affected. We know the exact figures for the city centre but away from there, information is harder to obtain”

Many representatives from affected businesses attended the meeting, including Jin Zhu, whose I-convenience store on Essex Street was one of the first attacked. She told us, “It was on Monday night. We hadn’t heard anything about any problems then suddenly as I was locking up around thirty people came into the shop. I thought they were just trying to frighten us at first but they stole our stocks and took two tills. We weren’t insured because we’ve only opened recently and our insurance hasn’t yet been sorted out. We hope to be eligible for aid, but more than that we want reassurances that we will be safe. Someone had already tried to rob us before these riots, but when we called the police they didn’t come until the following day.”

The council have stressed that all victims of the disorder throughout the city will be entitled to make claims. One such victim was Roxon Doyley, whose K&R Fashions in Acocks Green was broken into by opportunist thieves while police resources were stretched. She said “I thought we were safe, away from the trouble, then when I arrived at the shop on Wednesday morning raiders had smashed their way through the roof. I reckon about 90% of my stock was taken – I’m hoping to re-open this week.”

Aid is not just restricted to financial or material assistance. Members of the city’s Crisis Support Team are available to offer confidential help to anyone who may have been affected by the disorder. Resilience and Business Continuity Manager Mo Phillips told us, “We know that witnessing these events may have been traumatic for some people. We have trained staff available 24 hours a day who can offer support and information to anyone who needs help or reassurance, now or in the future.”

While there was some criticism of the council for not acting faster, and it’s hard to argue with one trader who said “Why is this meeting being held in the city centre during business hours? They should have come to us in the evening,” agencies in Birmingham do seem to be doing all they can to minimise hardship caused to local businesses and help the city get back to normal.

For more information on the above resources, visit www.birmingham.gov.uk