Pupils in Balsall Heath have been learning about the history of Moseley Road Baths and creating short films based on their interviews with people who have memories of the building.  As part of the Friends of Moseley Road Baths’ ‘Pool of Memories’ project, funded by the Heritage Lottery Fund, they have been working with local film-maker Rachel Gillies to create a series of short films.

The pupils have taken a tour of the building, done research about its history and learnt how to conduct filmed interviews, before editing their footage into short films to add to the group’s growing archive.

Pupils from Park Hill Primary School in Moseley screened a Premiere of their films in a special assembly on 16th May at 9:00am.  They include an interview with someone who almost gave birth in the pool, and another interview with a local stonemason who shared his memories of work to the windows back in 2004. 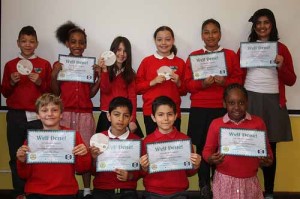 The Friends of Moseley Road Baths secured Heritage Lottery Fund money to run the extensive, 3-year oral history project, based on the history of the building.  Four out of nine school projects have been completed, with more than 35 young participants from four schools so far creating more than ten short films.  The work of the young historians has been added to a dedicated website, www.poolofmemories.co.uk as well as being used in local screenings and in educational projects.

The project is especially welcome at the moment due to the temporary closure of Moseley Road Baths whilst urgent repair work takes place.  It is hoped that the pool will reopen for swimming by mid-June.

“The children have really enjoyed learning about the importance of the baths within the local community. In addition, being able to interview local residents and make a film about it has been an invaluable experience!” said class teacher Clare Belshaw.

“I really enjoyed the project as I learned so much, such as how to set up a tripod.  I enjoyed visiting Moseley Road Baths and learning about its rich history as well as being able to go into the areas that are closed off from the public.  We also interviewed people and edited parts of the interview” said Poppy Emson, one of the pupils who took part.

Jenny Austin, the Pool of Memories Co-ordinator added: ‘This has been a fantastic way of getting young people excited about their local heritage, they really have taken the role of sharing and celebrating our local history seriously.’

Project worker Rachel Gillies added, ‘It has been wonderful to see how enthusiastic the pupils have been.  Pupils have had fun learning about this beautiful local building at the same time as gaining research, interviewing and film-making skills’