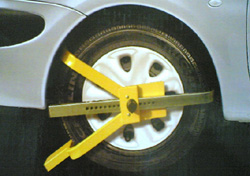 Back in the Stirrer days we regularly commented on the insidious nature of Birmingham’s car clampers and how they made visiting the city centre a potentially hazardous business for unwary motorists.

Eventually the city council began to make life difficult for these barely-legal extortion artists and it’s good to see that convicted car clampers Gary Southall and his partner Victoria Charlton were ordered to pay back the victims of their illegal clamping business at a hearing on Friday 13th May.

At Birmingham Crown Court His Honorable Justice Juckes QC made confiscation orders under the Proceeds of Crime Act 2002 ordering Southall to pay back £22,151 and Charlton £25,000 as a result of their role in the illegal clamping business National Parking Control, which ripped off motorists using various tactics at sites round Birmingham in 2006 and 2009. The judge stated that Southall had made a benefit of £100,000 from his criminal activity and Charlton £25,000.

Both Southall and Charlton were ordered to pay the full amount within three months or face a further year in prison. Judge Juckes specifically ordered that of the combined total, £11,010 is to be paid back to the thirty victims of the illegal activity.

Southall is currently serving a four year prison sentence after pleading guilty to conspiracy to defraud and was the ringleader of  National Parking Control, which clamped innocent motorists, demanding fees of up to £575 to have vehicles returned. Many victims complained of being intimidated by members of the clamping gang. Charlton pleaded guilty to the same offence but received a suspended prison sentence.

Co-defendants Wayne Southall and Phillip Bennett who were also originally imprisoned were both ordered to pay nominal orders of £50 having been declared to have benefited by £50,000 and £25,000 respectively but were found to have no assets.

It’s to be hoped that other car clampers will be punished severely for any further misdemeanors until the time when such rackets are outlawed completely.