It is wonderful to have age-appropriate theatre for three to six year olds, and this production engaged its audience from the beginning. Or even from before the beginning, since its cast of three came into the Birmingham Rep foyer to meet and greet. By the start of the show, having entered the Rep’s intimate studio theatre as one, by way of a leafy bower where toadstools grew and birds sang, children and actors seemed like old friends. 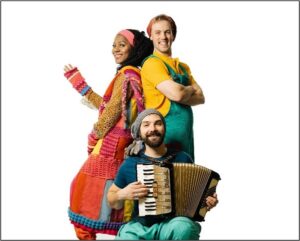 The connection was maintained as the characters spoke directly to the audience, with Cian, the narrator, providing a further bond. In response, the audience obligingly supplied sound effects for wind and rain, helped Jack make that all important decision to swap his cow for a handful of magic beans, and shouted out their favourite foods to the hungry giant.

There was a lightness of touch to the show, and yet a measure of learning ran throughout, as the children tested their skills in counting, in keeping rhythm, and in creativity. Clever props and puppets, in particular, required imaginative interpretation: Jack’s cow was made from a raffia mat and a wicker basket, the golden goose from sacking, and the mouse from a metal funnel, topped by ears. Some of the puppetry was a little disappointing: the choice to make the puppet of Jack a rather featureless string doll was odd, and the beanstalk – which we all know is enormous – seemed a little small and flimsy. But the giant, in a mask fierce enough to convey anger and enmity, but not too fierce for a young audience, worked brilliantly when scaled against puppet Jack.

The ending, where love and hope overcome all odds, provided reassurance to little ones, if any were needed.

Performances were strong all round, with much use made of physical humour and singing, including three-part harmonies. Nataylia Roni, as Mum, had a particularly lovely voice and a compelling stage presence. Sam Butters, playing Jack, sang well and had a natural ease with children. Dominic Rye, as Cian, was a skilled multi-instrumentalist, and made a great raconteur.

Jack and the Magic Beanstalk is at Birmingham Rep until 31st December. If you have little ones, this could be a highlight of their Christmas.