We’ve seen him on our TV screens – he was with us through lockdown in Channel 4’s TV series, Grayson’s Art Club, encouraging that creative drive that lives in us all. This exhibition features works selected by Perry in his third series which ran during 2022, and brings together contributions of a hundred or more makers and artists, amateur and professional. Dotted in between are works by Grayson Perry and by his wife Phillipa Perry, an artist in her own right.

In an exhibition where the level of detail is riveting, and the contributors’ personal expression compelling, there are almost too many highlights to mention. But a knitted replica of Sandringham Palace takes centre stage. Two years in the making, Margaret Seaman’s piece, Knitted Sandringham, is inspired by the architecture and landscape of the Norfolk estate. Eighteen feet long, it is a woolly reconstruction of the house and church, the stables and gardens. The fine execution of gables and chimneys, and of shrubs and trees is extraordinary. 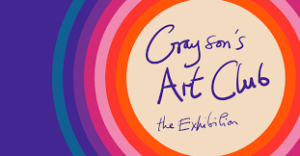 Imaginative interpretation of the exhibition’s themes is key to its success. Pieces exploring ‘The Queen’ theme range from models of corgis to drag queens, whilst a collage, Land of Hope and Glory, by Simran and Mandish Khebbal, speaks of the experience of racism. Cut-outs of the queen at various stages of her life are positioned in front of Buckingham Palace. Floating above is map of the Commonwealth and alongside a voucher from 1963 sent to anyone in the Commonwealth who wanted to work in England. The Khebbal’s father had received one and the artists’ statement reads: “If anybody said to him ‘go back to your own country’, he said ‘I can’t, the queen invited me’.”

The theme ‘Inside My Head’ is explored through pieces ranging from the experience of lockdown through to that of gender transitioning, whilst pieces on the theme of ‘Love’ include an AIDS memorial quilt by Jo Riddle, Katherine Low and members of the UK AIDS Memorial Quilt Partnership. As well as memories and tributes, it includes statements marking the fact that people no longer have to die from AIDS.

‘Normal Life’ is probed in a humorous work, Tess and Trace, by Glen Wilce featuring an automata of two women pushing covid testing sticks up their noses, whilst Manchester Women by Steward Hutchen is a moving mixed-media model of women inspired by photos in 1960s/70s Salford and Manchester.

One of Perry’s own works, Forest Spirit, uses his iconic teddy bear, Alan Measles, to represent a god which is channelling the anger of the rain forest under threat from human behaviour, and influenced by the pre-Colombian pottery of the Chancay culture of South America.

Whilst the exhibition doesn’t have a strong flow to it, not helped by pieces being scattered across MAC’s various display areas, it does convey a sense of Perry’s generous spirit and his interest in making a space where the creativity of others can flourish. Are the pieces of equal artistic merit? Maybe not, although that is a long debate. Are they all of interest? Emphatically, yes.

Grayson’s Art Club is on at MAC until 16th April. For further information: macbirmingham.co.uk.