Following on from a highly successful run at Birmingham Rep, which continues until Saturday 31st December, Jack and the Magic Beanstalk will tour to ten community venues across Birmingham. Tickets will be free or at low cost thanks to the generous support of the Sir Barry Jackson Trust. 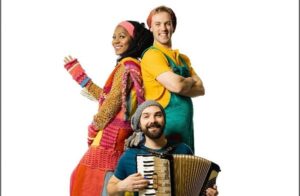 Director of Jack and the Magic Beanstalk, Caroline Wilkes, added; “It is a real delight to be able to share this magical production with more young children from across Birmingham following our run here at The Rep. Thanks to the support of the Barry Jackson Trust, hundreds more children will have the opportunity to enjoy what may be their first experience of live theatre who otherwise may not have been able.”

Created at The Rep for children aged 3-6 and their families, Jack and the Magic Beanstalk is a theatrical fairytale for young audiences. Jack loves his Mum, and his Mum loves Jack. Jack also loves his grub and dreams of food. The extremely greedy Giant loves food too, but doesn’t leave enough for all to share. Join Jack on his fantastical, festive adventure of magical beans, golden harps and towering beanstalks, as he climbs to the land above the clouds to teach the Giant a jolly good lesson.

Jack and the Magic Beanstalk features Sam Butters as Jack, Nataylia Roni as Mum and Dominic Rye as Cian.

The production is directed by Caroline Wilkes and written by Katherine Chandler. Set and costumes are by Deborah Mingham, lighting design by Sam Waddington, music is composed by Reisz Amos, Assistant Director is Janeel Brown and Production Manager is John Rowland.

Jack and the Magic Beanstalk continues its run at Birmingham Rep until Saturday 31st December. To book tickets visit Birmingham-rep.co.uk, call 0121 236 4455 or visit the box office during opening hours.

For more information on the community tour dates and tickets visit Birmingham-rep.co.uk.