Brummie legends UB40 has been honoured with a gigantic hoarding on the golden mile of Broad Street in the worldfamous reggae band’s hometown.

The stylish façade, measuring around 15 metres by three metres, has been placed in front of the former Players nightclub at 240 Broad Street while that building is temporarily empty.

The special design has been unveiled just days ahead of the band’s appearance on stage at the Utilita Arena Birmingham this Sunday 18th December.

The hoarding, which incorporates top highlights from the band’s history, has been created by Westside Business Improvement District, in close liaison with UB40’s management, and produced by giant sign experts at Hollywood Monster. The design highlights: 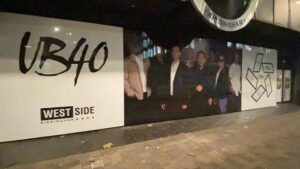 Robin Campbell of the band said: “This looks fabulous! What a wonderful surprise! We knew nothing about it until it was about to go up, but we’ve been along to have a look and it’s lovely, a really nice tribute.”

Mike Olley, general manager of Westside BID, said: “We’re so lucky here in Birmingham to be able to celebrate such a world-famous music band.

“When Players nightclub closed, we agreed with the building’s owners that we could dress up the outside to make it look great while the company re-energised to create its new brand.

“The result is our special tribute to UB40, a band that deserves to be shouted about in the city, and perfectly timed to coincide with their appearance this weekend.”

Mr Olley explained that the design of the façade was also intended to publicise the new design of how the Walk of Stars might look once it had been relaid on Broad Street.

He added: “The Metro tram works involved removing most of the Stars, and we are now working closely with the Midland Metro Alliance on exactly how and when they will be put back in place.

“As well as honouring UB40 and creating a dazzling temporary frontage for the old Players, the design allows everyone to see the sort of design we intend for Westside once the Walk of Stars is put back in place.”

Robin Campbell added: “I think the new design of the Star looks good, and I can’t wait to get the actual Star in the ground on Broad Street where everyone can see it.”

Tim Andrews, chair of Hollywood Monster, said: “We were thrilled to play our part in making this top tribute to such a great band!”