From being a reporter on local newspapers in the Midlands to becoming a successful rom-com author and the wife of a Black Country rock god – that’s the career path of journalist Suzan Holder, who was guest speaker at the annual Birmingham Press Club Christmas lunch.

Held at Edgbaston Golf Club, and attended by almost 100 guests, the lunch was sponsored by award-winning Tipton-based Let’s Sanify, the manufacturer of organic sanitising liquids. 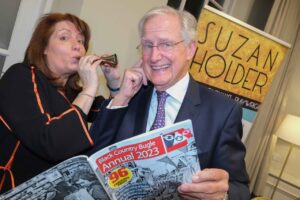 Halesowen-born Suzan, who has been married for more than 30 years to Slade frontman Noddy Holder, had her first reporting job on the Black Country Bugle after two weeks work experience with the Wolverhampton Express & Star.

She entertained guests as she related her journey from being a reporter on a number of Midland regional newspapers to becoming a television producer and then a rom-com author, publishing two books this year with a third in the pipeline. She is also a magazine columnist and discusses news and current affairs on radio and TV.

Suzan is seen here with Press Club president, television personality Bob Warman, whose own career started as a journalist working in Walsall.

After becoming an Honorary Life Member of Birmingham Press Club, Suzan received the traditional gift of a bugle crafted in Birmingham’s jewellery quarter by Acme Whistles.

Guests also joined in a rendition of “Happy Birthday” to retired Birmingham Mail journalist Peter Swingler, who was celebrating his 88th birthday.