Chris Winter watches a great band helping a good cause at Symphony Hall.

According to Chris Difford halfway through the second of their two nights in our fair city, Squeeze have been playing Birmingham since 1975. Wherever it was that they played in those far-off days i’m sure the carpet was a lot stickier and the seats a lot more uncomfortable than you get at Symphony Hall.

Looking at the audience, there were a few who could have been at that embryonic performance and as if in tribute the band take to the stage and strike up with Take Me I’m Yours, the one that started it all for them. If I’m honest I raised a bit of an eyebrow early on. It seemed a bit too fast, the sound wasn’t quite there and the drums in particular boomed a bit too loudly. But nobody else seemed to mind so I sat back and enjoyed the music. 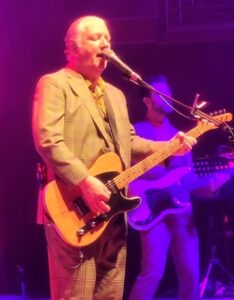 Whatever problems there had been with the sound seemed to fix themselves easily enough and from then on listening to Squeeeze was like putting on a comfy pair of slippers. Fashions may come and go, but sometimes all you want is something familiar and above all enjoyable. I’d forgotten just how good Hourglass was, at least until the opening bars, and Up the Junction remains both one of the most uplifting and at the same time saddest songs ever written.

There were a few parts of the set I wasn’t familiar with, then Labelled With Love was the first mass audience participation number of the night. Phones were out, arms waving, couples singing along with what many of them will call “our song”. A word here as well for whoever arranged a light show that was spot on and in keeping with the sublime quality of the occasion. To go back to the beginning, the line-up of the band may have changed, but the seven-piece touring version were a fitting accompaniment to the compositions of the masters.

New song Food For Thought was introduced by Glenn Tillbrook talking about the work of the Trussell Trust, who will be receiving royalties from the CD it appears on. It’s a worthwhile venture, even if it did provide a sobering moment that was in contrast to the exhuberence as the band moved seamlessly into Pulling Mussels From a Shell. Is This Live was another highlight, while one of my favourites was the funky The Very First Dance with some natty keyboard work.

The audience leapt to their feet at the opening bars of Goodbye Girl, the singing and dancing increased during the absolutely wonderful Another Nail in My Heart, or rather it did until a couple of security/stewards cleared the aisles of dancers. A stripped-back version of Tempted which largely consisted of Tillbrook and his guitar fitted the evening well and it was left to Difford to sing us to the end of the set with Cool for Cats.

The encore began with some very space age keyboards introducing Slap & Tickle. Black Coffee In Bed gave the rest of the band the opportunity for some extended soloing and that was it until the next time.

If I could be so bold as to make a suggestion, perhaps for that next time they could leave support act John Cooper Clarke at home. He might have gone down well but his set never changes, his misogyny grates and above all, he isn’t funny.

Squeeze are on tour until 30th November. Tickets via gigsandtours.com and ticketmaster.co.uk.

For more information on The Trussell Trust go to trusselltrust.org.