Half-season ticket launch will see help given to city charities.

Birmingham City Football Club is working with foodbanks across the city to support them with both funds and donations through the club’s upcoming half-season ticket campaign, #SupportBirmingham.

The club will be donating a quarter of all revenue from sales of half-season tickets to four foodbanks in various areas of the city, as well as providing the club’s Community Trust with funding to distribute free lunches, as the cost-of-living increases across Birmingham.

Alongside monetary donations, the club will also be hosting food drop-off points on matchdays for supporters to donate cupboard essentials, which will then be taken to the designated foodbank for that matchday.

Continuing the campaign to support the city during an economic crisis, the club is also partnering with city centre charity Let’s Feed Brum to deliver a mobile breakfast club along school routes local to St. Andrew’s. The van will be serving toast, fruit and cereal bars, free-of-charge, to students in schools with high free school meal rates, as well as sponsoring Let’s Feed Brum to deliver its breakfast club in Victoria Park. 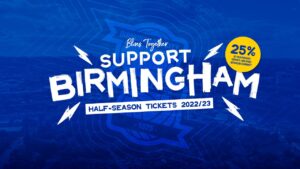 Birmingham City FC Community Trust, the club’s charitable arm, works with children in the most vulnerable areas of the city to offer free football coaching, where attendees all receive a free lunch. Donations from the sale of half-season tickets will also go towards funding these meals.

Half-season tickets go on sale on Thursday 18th October, with prices starting from £210, working out at less than £20 per match in certain areas of the stadium.

Ian Dutton, managing director at Birmingham City Football Club, said: “We are a community club, and we carry the city’s name. It is important that we recognise the feeling in our city, and do what we can to support those who need it the most.

“Foodbanks in Birmingham help thousands of people a day, and whilst it is fantastic that we can support them financially, we are calling on all our supporters and local residents to donate as much food as possible on matchdays so we can help feed our city.”

Ben Rafiqi, founder of Let’s Feed Brum, said: “It is brilliant to be working in tandem with Birmingham City FC. It is so encouraging for us as a charity to receive support from a football club and better still to see the club committed to serving the community in its local area. I’m sure the parents of the schoolchildren will really appreciate this initiative.”

To purchase a Birmingham City FC half-season ticket call 0121 772 0101, and to stay up-to-date with the #SupportBirmingham campaign, visit bcfc.com