As they prepare to embark on their Food For Thought 25 date UK tour which includes two nights at Symphony Hall, British music legends Squeeze announce the release of a new six track EP on November 4th. The title track, Food For Thought, is a brand new song written by Chris Difford and Glenn Tilbrook, that is a pithy commentary on society, the cost of living crisis, and the increasing reliance on food banks.

“It’s terrible and wrong that so many people have no choice other than the help that food banks provide to feed their family. That there are so many people who have to choose between food and heating is a disgrace,” said Glenn Tilbrook. 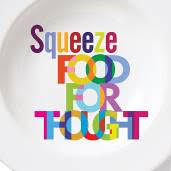 Also included on the EP are new recordings of The Very First Dance and Electric Trains as well as live recordings of In Quintessence, Slap and Tickle and The Day I Get Home recorded at the Liverpool Philharmonic. Profits from the EP, which will be released digitally and sold on CD at the shows, will go to Independent UK food banks.

In addition to the donations to independent foodbanks from the EP, Squeeze are also continuing their relationship with the anti-poverty charity The Trussell Trust. Throughout the tour Squeeze and their fans will once again be supporting the charity which provides emergency food and support to people locked in poverty while campaigning for change to end the need for food banks in the UK.

“It’s so sad that in these times people have to lean on local food banks to feed their families, please support The Trussell Trust by offering as much as you can afford and enjoy the music we have created,” said co-founder Chris Difford.

Right now, millions of people across the country are facing a cost of living crisis as food and energy prices soar and families are feeling the biggest squeeze on incomes in a generation. That’s why attendees on the tour are being invited to bring along food donations to the shows, where there will be collection points across the venue each night. There will also be collection buckets for any cash donations. All donations will be distributed to people in crisis across the 1,300 food bank centres in the Trussell Trust network. Item requested by the charity can be found here. Previous tours by Squeeze and Glenn Tilbrook have raised tonnes of food and thousands of pounds for the charity.

Emma Revie, CEO of The Trussell Trust, said “The cost of living crisis is impacting all of us, but for people on the lowest incomes it means they cannot afford the essentials such as heating or food. We are extremely grateful to Squeeze and all of their fans for kindly donating to the Trussell Trust from their tour, their generosity will help us ensure that food banks across the UK are able to continue delivering vital support this winter.”

The 25-date ‘Food For Thought’ tour, which includes two nights at Symphony Hall on 12th-13th November, will see Squeeze dip into their impressive list of hits and rare gems from throughout their extensive back catalogue. Joined by special guest and original ‘people’s poet’ Dr John Cooper Clarke, tickets are on sale now via gigsandtours.com and ticketmaster.co.uk.