The cast has been announced for Lichfield Garrick’s brand new comedy play for Christmas, The Bah Humbug Club, written by local Lichfield writer Carolyn Scott-Jeffs and promising laughs, a few tears and a bit of nostalgia – like all best Christmases – from 8th–27th December.

Érin Geraghty, Danny Horn, Beck Graig and Rosie Coles will take on the roles of four incompatible Christmasphobics playing an elf collector, an internet troll, a streaker, and a Nirvana fan. The Bah Humbug Club begins in 1999 with four strangers who don’t like Christmas spending it together by chance only for them to choose to spend the next 20 Christmases together.
Irish actor, Érin Geraghty brings decades of screen and stage experience with a career which began in 1966, when she was chosen to dance in a film with Julie Andrews. Érin takes on the role of Pauline, the main protagonist in The Bah Humbug Club, the glue that holds the club together. 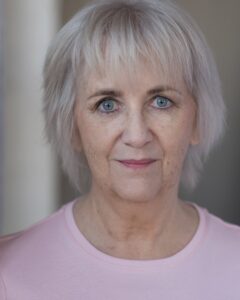 Talking about the role Érin (pictured) commented: “I’m absolutely thrilled to be coming to lovely Lichfield over Christmas, especially for such a fun play. Christmas is so overhyped that many people find it overwhelming and for many, it’s a painful lonely time. The Bah Humbug Club is the perfect Adult Antidote to it all! A Christmas show for those who don’t like Christmas!”

Beck Greig brings experience from immersive theatre productions in London, they will bring the role of Kurt Cobain and Nirvana loving Andy to life, their story spans their late teens years through to adulthood with Andy becoming a successful human rights lawyer.

Danny Horn will bring his stage and screen experience – including Doctor Who and Vera – to the role of Fred, a cricket fan and streaker who heads off on that first Christmas in 1999 in order to try and clean up his act. Experienced stage actress Rosie Coles completes the anti-festive four in the role of Jane, secretly an internet troll, the 20 Christmases follow her failed love life, will the final Christmas in the play bring a happy ending for Jane?

Matt Clay, Interim Executive Manager of the Lichfield Garrick said: “We can’t wait to welcome Érin, Beck, Danny and Rosie to Lichfield Garrick and to be producing this brand-new show by talented local writer Carolyn Scott Jeffs. The production promises a lot of laughs, tears, and nostalgia and is the perfect Christmas entertainment. It feels great to be open and offering so much festive fun for audiences this winter – we look forward to welcoming you into the theatre!”