Jessica Harris kick off the festive season at the RSC.

The story of Ebenezer Scrooge, a man so infamous for meanness that his name has become a metaphor for it? Or the story of Dickens the novelist, and of what drove him to fictionalize social issues? This adaptation by David Edgar weaves its way brilliantly between these two themes.

The tale, of course, is well-known. Scrooge, the skinflint, who begrudges his clerk, Bob Cratchit, a day off at Christmas, is visited by spectres who present him with the past, and foretell how the future will be if he doesn’t change his ways. The visitation by the Ghost of Christmas Past, which shows Scrooge sad and neglected as a child, is mirrored by the life of the young Dickens. With a father thrown into a debtors’ prison, and a year spent working in a blacking warehouse, Dickens knew about neglect and poverty.

The Ghosts of Christmas Present and Christmas Future show Scrooge the reality of life for the Cratchit family as they eat their meagre fare, and foretell the untimely death of young Tim Cratchit from poor living conditions. Scrooge’s journey, as he learns to see what is around him and to find empathy with others, is mirrored by that of Dickens, who realised the power of his pen to raise awareness of social injustice. 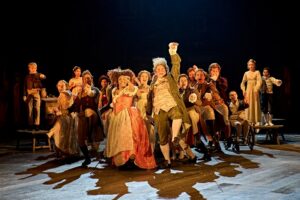 But Edgar takes the framing of the story within the mind of the novelist to another level. At times, Dickens and Forster, his friend and editor, speak words which are then repeated by the characters. The effect is to emphasise the archetypes, and to invite us, the audience, to revel in the comedy this creates. And, of course, we are invited to grasp the broader protest against poverty and injustice, and to recognise the parallels with today. The poor are constantly told to “live within their means”, and even, if unable to manage financially, instructed they had better die and decrease the population. Not all accept this: Mrs Cratchit for one retorts, “Things don’t have to be like this”.

Though the messaging is clear, the joy of Christmas and the happiness that comes from friendship and families is not forgotten. As Forster says to Dickens, “You can’t end a Christmas story with a corpse!” Interludes of joyful dancing by the whole cast, enchanting singing, particularly by the children in the production, and a happy ending, all see to that.

A set of epic proportions depicting slum housing of Victorian London, smog created through dry ice against the darkness of the set, and falling snow provide atmosphere and depth. The subdued colour palette of period costumes is splashed with deep reds, whilst the Ghost of Christmas Present arises from a throne draped in fruits and flowers, in lacy gauze of peacock blue. Dickens himself, played by Gavin Fowler, is in a dapper maroon smoking jacket with checked trousers.

And the effects go on: Scrooge’s four poster bed rises to reveal the three spectres, enchained and ghoulish. The carpet floats above the stage as he is taken to see the truth of working class lives. The Ghost of Christmas Future, a young girl in white, emerges from a huge and threatening dark shadow.

Adrian Edmondson as Scrooge holds the stage, with a portrayal that encapsulates both dark and light, and whose excellent timing enhances the moments of pathos and also the moments of pure fun. Clive Hayward plays the larger than life Mr Fezziwig with great humour, whilst Sunetra Sarker is a captivating Ghost of Christmas Present.

This glorious production contrasts high energy with moments of poignancy, and is superbly adapted for older children, young people and adults alike. Its Christmas message rings out loud and clear: Look around you; understand; have empathy.

A Christmas Carol was directed by Rachel Kavanaugh and designed by Stephen Brimson Lewis. The stage adaptation was by David Edgar. It is on at the RSC in Stratford until 1st January. Further information can be found at rsc.org.uk .

One thought on “Review: A Christmas Carol”