Fast-paced, highly contemporary and hilarious, this adaptation of Molière’s play knows how far to take the ridicule of stock characters, and also when to apply the brakes to expose the pathos of the situation.

Two men circle each other: Imran, a businessman living in Birmingham, holds authority over his family whilst Tartuffe, masquerading as a learned and devout imam, holds sway over Imran. In their wake, members of the Pervaiz family try to assert their independence and develop their own identities.

Onlookers and sometimes advisers to this situation are Darina, the cleaner and Khalil, Imran’s accountant and business adviser.

Although, ostensibly, it is the older men who have the power, it is the women who determine the outcome. Mariam, daughter of Imran, refuses his attempts to marry her off to Tartuffe, whilst Amira, his wife, sets herself up as sexual bait for Tartuffe to show her husband what a hypocrite he is. Meantime, much of the action to persuade Imran to see through the charade created by Tartuffe is managed by Darina, herself a Bosnian Muslim. 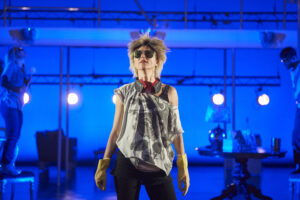 The production explores not only the theme of religious hypocrisy, but also the issue of what it is to become ensnared by zealotism. In a discussion when Tartuffe defends emotion over logic, Khalil describes the long history of Islamic scholars’ involvement in the field of science. Darina uses evidence from the Quran to show him to be wrong in saying that Islam requires women to cover their hair.

Cultural differences across the generations is another theme, with younger members of the family wanting to express their interests and allegiances in their own way. Mariam’s final song asserts her right to express her own identity as a British Pakistani, whilst music and songs from rap through to bangra enrich the production and are a testimonial to diversity.

The final scenes of the play risk running a number of new threads into what is, up to this point, a tightly focussed piece. Ranging from the insecure status of migrants and their families within the UK, through to the nature of terrorism, these felt somewhat sporadic and a little messy. Nevertheless, a jibe at the current state of British politics was a timely reminder that extremism comes in many forms.

Costumes, from the traditional dress of the elders to the t-shirts and jeans of the younger family members, were an indication of inter-generational tensions. The trappings of consumerism in contemporary British life were represented by a glitzy chandelier and an oversized urn.

Performances were strong all round, with those of Simon Nagra as Imran Pervaiz, Asif Khan as Tartuffe and Olga Fedori as Darina being particularly impressive.

Tartuffe was adapted by Anil Ggupta and Riochard Pinto, and directed by Iqbal Khan. All in all, a thoughtful, relevant and highly entertaining production, Tartuffe is well worth seeing.

Tartuffe is on at the Birmingham Rep until Saturday 5th November. Further details

One thought on “Review: Tartuffe”