I get very uppity at times when bands don’t include a visit to my home town on a tour. I mean, this is only the Second City isn’t it? With a plethora of venues of varying sizes and a passionate and knowledgeable population as far as music is concerned. But miss us out they do and I have to put my parochial sniffyness to one side in order to enjoy myself a little bit, so I reluctantly hit the road.

The road in question was the M40, having endured another drab and disappointing afternoon watching my football team on the north side of the city I set the dials for Oxford and a second date with Public Service Broadcasting. My first taste was at the Royal Albert Hall during the BBC Proms back in August, as the band and the BBC Symphony Orchestra performed a specially composed piece to celebrate 100 years of the BBC. This time would be a lot more informal though, more so than I expected by the climax.

It being a Sunday and with the centre of the university town expected to be less busy than usual I chanced my arm at getting as close to the venue as possible. Always a risk of course, Oxford being the capital of park and ride you’re never more than a wrong turn away from a bus lane and subsequent fine, but with little trouble I pitched up in a city centre car park and with the help of a friendly homeless man negotiated the ticket machine relatively trouble free. Said vagrant was assisting everyone who looked befuddled at the technology and had me recall the days when people were employed to do such a thing for a decent living rather than the indignity of a benevolent handful of small change. 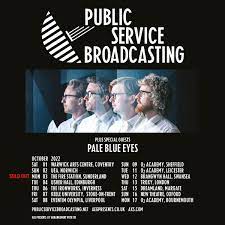 We dodged the rain as we walked past the tour bus parked outside the venue, the band obviously taking the same risk as me in regards to parking, and entered The New Theatre. Resplendent in red carpet, notable for its Art Deco design, with narrow, steep stairs we imbibed in the piano bar (said Piano under a cover and out of use) before making our way to up to our seats up in the Gods, walking past posters for upcoming shows such as Saturday Night Fever, Steeleye Spans 50th anniversary (is that all?) and a concert next month by Anastasia who is now “outa” lockdown as well as Love or so the advert stated.

Public Service Broadcasting are a curate’s egg, part prog but with pop sensibilities, arty and intense but with a sense of humour, nostalgic via a futuristic approach and the only act I know that includes the visual director as part of the line-up on stage, operating his technology like an instrument. Initially basing their music around old clips from the British Film Institute archives they have moved onto concept albums about early space exploration, the Coal industry and their latest release sees the band doing a Bowie by not only featuring Berlin as the subject but also recording at the famous Hansa studios.

The Thin White Duke features at the start, as Sound and Vision plays over the PA before the band take the stage to perform The Visitor, featuring a sample of an interview with the man himself. From then on the band run through more tracks from 2021’s Bright Magic alongside other tracks from their oeuvre, augmented by German singer and keyboard player EERA and a volumous brass section, who provide an energetic counterpoint to the static nature of most of the band.

The visuals, as expected are stunning, replications of the promotional videos feature heavily on the screens as well as that archive footage, from the thunderous images of the Miners’ Strike to rollerblading dancers, from Mission Control in Houston to the summit of Everest.

The band’s mission statement to Inform-Educate-Entertain is certainly there and despite the rather dry perception one may have, by the end of the concert the whole theatre is on its feet as the music recalls something along the lines of Earth Wind and Fire rather than Emerson Lake and Palmer. In stark contrast to my introduction to Public Service Broadcasting live, it was a serious but no less enjoyable evening a performance of vibrancy, colour and joy. In fact the only disappointment of the whole concert is the fact that it wasn’t a sell-out. It might’ve been had they come to Birmingham.