Legendary local heroes The Beat will celebrate the life of its late frontman and musical pioneer Ranking Roger with a special one-off evening of live music at The Mill on Thursday 22nd December.

Fronted by Roger’s son and vocalist Ranking Jnr, who performed and recorded with his late father for close to two decades, the evening will feature a full performance from the Birmingham trailblazers plus very special guests from the worlds of ska, reggae, and punk. 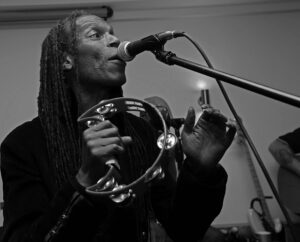 The Ranking Roger Memorial Show will offer fans and friends of the frontman a chance to remember the Mirror in the Bathroom and Hands Off She’s Mine vocalist – often described as Birmingham’s first Black punk – and the influence and cultural impact Roger had during over three decades in the international music business.

The line-up includes a number of special moments soon to be revealed by the band, along with a four-hour post-show DJ set from the Ranking Roger Sound System led by Howard Hall aka Double H, featuring previously unheard dubs starring the late, great Ranking Roger.

Ranking Jnr said: “This memorial event has been planned for a few years, but due to Covid it was pushed back several times.

“We feel that now is the right time to celebrate the legacy of my dad, my best friend, my mentor, the guy who taught me everything I know about the music industry, and the man I stood side by side with on stage for the last twenty years.

“We can’t wait for our friends and fans to join us for a very special night.”

Ranking Roger – who joined The Beat in Birmingham in 1978 – passed away on 26th March 2019 after battling multiple brain tumours and lung cancer. Tributes from across the music world were paid to the Birmingham native, real name Roger Charlery, following his passing at the age of just 56.

Ranking Jnr went on to say: “It’s still hard performing without him, but I know he is there watching down on me and the band and still guiding us through all of this. He has passed on the torch, and now it’s for me to carry the flag for both of us and to continue his legacy.”