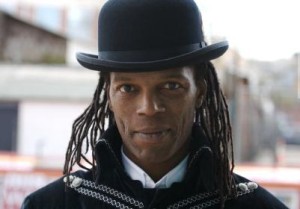 No band ever defined Birmingham as well as the Beat.

Gritty, hard-edged lyrics with an infectiously catchy groove, they brought together influences from the many cultures that make up the city and took them out to the world. Over thirty years later they’re still performing and in the first of a two-part interview we asked singer Ranking Roger what he’s up to now?

“Still playing lots of gigs. It’s going very well – every one this year has been sold out. We’ve recorded a new album and we’re just finishing mixing it. It’s really good, I’m proud of it.”

Is it an updated version of the old Beat, or is there a new sound in there?

“Our old fans will say it’s a bit different to the ska and punk influences. We’ve definitely grown up, it’s not middle of the road, but it’s very interesting. There’s a bit of an ambient dub sound, a bit of Dreadzone influence. The Beat haven’t gone ambient though.”

It’s 32 years now since Tears of a Clown first hit the charts. Did you ever think you’d last that long?

“From the day I left school I always walked my own walk. I’ve done what I wanted to do. Most people in the music business last for about four to seven years, then they’re either dead or they retire. Thirty years on and people say to me ‘You haven’t changed’. Having money and fame doesn’t change the person I am. I still want to play and to make people aware of their lives and of the impact we have on the planet.”

Like many other cities, Birmingham has changed a great deal since you were growing up.

“It wasn’t a glamorous place at all, it was a very rough city. There was a thriving music scene though, and everyone wanted to be in a band. You had places like Barbarella’s and the Rum Runner with bands playing and the Crown on Hill Street, where the punks used to hang out. There were a lot of people who were rebels then and are doctors or lawyers now. My favourites are the ones who were born into rich families and turned their backs on all that to become travellers. They rejected their wealth so they could experience life.”

The city used to have a notoriously strict policy about things like licensing laws and basically people enjoying themselves. How did this affect a budding musician?

“That was down to the council. They never realised Birmingham was a great centre for music. Places like Manchester and Liverpool realised this and they’ve become big music cities but it never happened in Birmingham for a long time. That’s why we have a much smaller network of musicians. It’s there, but it could be so much better.

“What this did, though, was make us rely on ourselves. You’d have house parties and shebeens where we listened to some of the stuff that came out before punk, r’n’b, then you’d listen to Lee Perry, then James Brown. All this gave us a real mixture of influences whereas if we’d been at a club in the city centre we’d have been listening to the Bay City Rollers.”

That scene in the city in the late seventies, when yourselves, Dexy’s and UB 40 were breaking through, then just after that Duran Duran from a different field. Did you feel Birmingham music was going places?

“Definitely. Everyone seemed to be involved. First we all wanted to be in punk bands, then new wave came along and although the punks hated it, that opened the floodgates. Suddenly we were getting better at playing, there were record labels starting up. It was what you’d call indie now, but that early period was when it started. Music was never the same again.”

Yet after that initial couple of years, the whole scene dried up and there’s not really been anything since.

“That’s right. There were other bands, such as the Au Pairs and Fashion who should have been big, but it never happened. The Two Tone bubble burst, new romantics came in and fashions changed. Getting onto Top of the Tops was the big thing, playing a synth and twiddling with a little box. A lot of electronic stuff was good but there’s more to music than that.”

You had one single on Two Tone then started your own label. Would you see the Beat as maybe a semi-detached part of that movement?

“To a degree, yes. We all had the same philosophy, although our music was slightly different. The Specials, for example, were more punky ska while the Beat were ska-reggae. Two Tone was an opportunity for us and it was a privilege to be involved. But we realised it was only going to work for a while. We founded Go-Feet, changed the colours from black and white to red and black, had our own new logos, so we could keep our identity.”

This may have been why the Beat continued when their contemporaries faded away as the public appetite for ska and Two Tone declined.

“Even when we changed our style we were still labelled a ska band, especially in the USA. The third album, Special Beat Service, has hardly any ska but we still had that label in the States. We did well over there, though,”

American ska bands always sound like they’re a lot harder-edged than ours. They must have taken that idea from the Beat.

“Yes, we were a big influence there but I still say they didn’t get it right for a long time. The original rocksteady that came from Jamaica, we couldn’t cut it playing that so we mixed it up a bit, took all sort of influences. The third wave of ska bands, the Americans, were full of a heavy metal and funk sound, they were too fast  and they couldn’t get a groove. They do seem to have improved a bit now, though. There’s a couple of Californian bands who are doing it better.”

When the Beat and Two Tone were in their heyday you attracted a large skinhead audience, which in those days equated with the far-right. You were opposed to everything they stood for so how did you cope?

“We couldn’t just blank them – they were in front of us. A year earlier they’d been punks, we’d all been at gigs together and now they were at our gigs Seig Heiling. We fronted them, and now all these years on I can say ‘well done’ to us for doing that. We get some of the old skins along now and they’ll tell us we were right. But really they were just kids, misguided, disillusioned. They didn’t really know what they were doing. We’re all like that – there were things I did when I was 16 or 17 that I don’t regret doing, but I certainly wouldn’t do now.”

They were grim times, yet although you and the other ska bands had a serious message you always made people happy. Your music was certainly for dancing to.

“Yes, and you still get it. Look at a song like Mirror in the Bathroom, it sounds really happy and it gets everyone dancing, yet the lyrics are quite sad. That’s one of the reasons why new people still love the music. It’s a really good groove.”

Solo work, the re-formed Beat, Birmingham in the 21st century.  All this and more will be contained in the second part of this exclusive Birmingham Press interview. You can read the second half here.