Jessica Harris watches a Shakespeare production that just fails to hit the heights.

Hero and Claudio are in love, but the malicious Donna Pedra tries to prevent their nuptials. Benedick and Beatrice are infatuated with one another, but just don’t realise it. True feelings are thwarted all the way round in Shakespere’s comedy Much Ado About Nothing.

Whilst Hero and Claudio’s path to love follows the text books, Benedick and Beatrice play out their courtship through squabbles and quarrels. Their rancour prepares the ground for the joshing they are to receive at the hands of their peers.
Scenes in which the relationship between Benedick and Beatrice is played out work well, with the contemporary setting adding to the comedy. Leonato, Claudio and Don Pedro make sport of Beatrice’s love for Benedick from their massage couches, Benedick himself being one of the masseurs. This is neatly mirrored in the next scene where Hero, Antonia and Ursula ensure that Beatrice hears them talk of Benedick’s love for her, with Beatrice taking up a seat in the auditorium to overhear them. 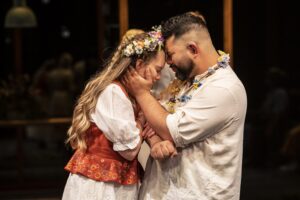 But, interestingly, it is the love between Beatrice and her cousin Hero which is most persuasive in this production. As she asks Benedict to kill Donna Joanna, Beatrice, played by Daneka Etchells, plumbs a depth of performance which is driven a deeper emotion than any shown in the other relationships.

Moments of music and dance add texture: the masked ball in which Hero and Claudio become betrothed is turned into a line dancing party, cowboy hats and all, whilst the song at Hero’s grave has poignancy.

Actors take on signing as well as their own roles, the signing moving deftly from one performer to another. As signers, their facial expressions become a commentary on the actions on stage, adding to the comedy.

However, a lack of nuance in characters from one scene to another contributes to a feeling of sameness throughout, and we are grateful for the punctuations of dance and music. Delivery of lines is sometimes raced through – an occasional pause can be worth its weight in gold to a listening audience.

And whilst humorous scenes pepper the action, including the double act of Dogberry the constable, and her deputy Verges, the humour sometimes feels a little ham-fisted. Yes, there is much jesting to be had from the text, but sometimes the posturing is overplayed. And although there is a strong cast of women in this version of Much Ado About Nothing, one of the central themes – that of the ideal woman, whose virginity is intact on the eve of her wedding and who bends to her father’s authority – is not challenged.

All in all, a spirited production that aims high but doesn’t quite reach the peaks.

Much Ado About Nothing is directed by Robert Hastiewith BSL direction by Emily Howlett and audio description directed by Chloe Clarke.

Ramps on the Moon is a pioneering initiative developed by a collaboration of six partner theatres around the country. Each takes it in turn to produce a large-scale touring show, with a mix of deaf, neurodiverse, disabled and non-disabled performers and creative team.

Much Ado About Nothing is at the Rep until 8th October. https://balletblack.co.uk/.