New Associate Artists to perform annually for next three years.

The world-renowned Grimethorpe Colliery Band is to give a very special Christmas concert on Sunday 4th December in the stunning setting of Lichfield Cathedral. In a roof-raising start to the festive season, the Band will perform a selection of Christmas favourites and much more for the Lichfield Festival Christmas Concert. 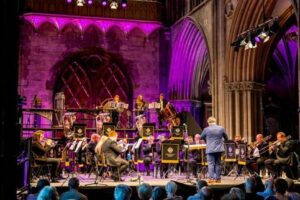 Lichfield Festival announced the world-famous brass band as an Associate Artist following their sensational Festival debut in 2021. Starting this Christmas, they will appear at the Festival annually, right up until 2024.

The Grimethorpe Colliery Band is a British institution. Formed in 1917, during the First World War, it has appeared at the FIFA World Cup, BAFTA Awards, BBC Proms, Eurovision and London 2012 Olympic Games Opening Ceremony, on national and international TV/radio and in recordings. The Band has two gold discs, as well as a BAFTA nomination for its contributions to the global hit movie Brassed Off.

Tickets on sale from Tuesday 18 October via lichfieldfestival.org, or by calling 01543 306271 (call-back service).