Simon Hale spends an enchanted evening at the Alex.

Chichester Festival Theatre’s production of the Rogers & Hammerstein musical South Pacific has sailed into Birmingham’s Alexandra Theatre on a huge wave of excitement.

Essentially a wartime love story, the show washes up an evening of joy sprinkled with a few tears while also justifiably expressing the attitudes of the time.

Themes of cross-generational romance, mixed marriage and racism are portrayed as passionate anti-racist Oscar Hammerstein intended when he wrote the libretto in 1949.

Gina Beck’s young lovestruck nurse Nellie Forbush rejects a marriage proposal from middle-aged widower Emile de Becque (Julian Ovendon) because she finds out that he has two children from his marriage to a Polynesian. 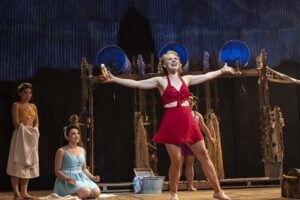 In another romance being played out, Lieutenant Joseph Cable (Rob Houchen), recently arrived on the same Pacific island, falls in love with local girl Liat (Sera Maehara), but finds himself too conflicted by his upbringing to marry her.
He nevertheless sings the song that Hammerstein was pressured to remove from the musical as a time of American segregation, You’ve Got to Be Carefully Taught. In it he expresses the idea that racism is not what you are born with and that any such feelings should be nurtured out before the age of six.

It is a feel-good song not as well-known as the non-stop hits from A Cockeyed Optimist to Some Enchanted Evening that make up the first half of the show. Most of the drama is reserved for the second half as de Becque and Cable head off on to another island on a dangerous mission.

Meanwhile bored servicemen waiting to see action are spending their time in horseplay. Luther Billis (Douggie McMeekin) as their leader, attempts to get the better of local trader Bloody Mary (Joanna Ampil) with her goods from the paradise island of Bali Hai’I.

The stage action takes place on a central revolving set, providing brilliantly seamless scene changes that avoid the need for stagehands. Sadly, but understandably given that it is a touring show, there are no stunning Polynesian backdrops to gaze on, only corrugated sheeting. But this does serve to highlight the exceptionally fine acting, singing and dancing skills of a brilliant cast.

Standout moments are all the fun of a shower scene where the nurses sing, I’m Gonna Wash That Man Right Outa My Hair, with real taps turned on, to Emile’s heart-breaking This Nearly Was Mine where it is tears that are now flowing.

Charming and escapist, this unmissable production revels in the power of love in transforming prejudice as we all seek out our Bali Ha’I.

South Pacific is in performance at the Alexandra Theatre, Birmingham until Saturday, October 1st. Tickets.